Okay y'all Bridgerton on Netflix is pretty great. 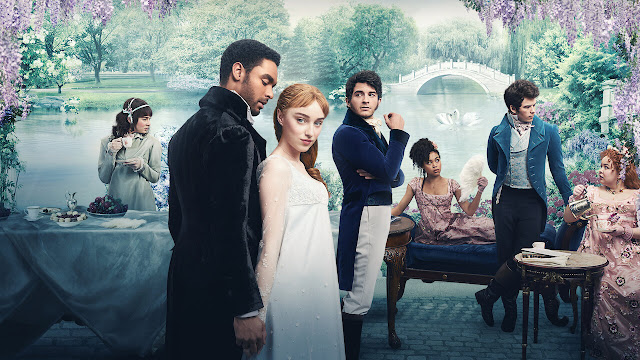 This week I fell down the Bridgerton hole. It was a good fall. At first, I had no idea what to expect. I've heard the buzz about Bridgerton from online sources to NPR. I am familiar with Shonda Rhimes, and her catalogue of work. But I hadn't heard of Chris Van Dusen, who created the show, and who deserves the lion's share of credit in bringing this masterpiece to realization on Netflix. I started out on a boring Monday evening, looking through some shows to watch, when I saw it at the top of the Netflix queue. "Why not?" I asked myself. "People seem to like it, and if it's not something I want to watch I can switch to something else." Well, I started watching and literally before the credits rolled on the show I was hooked. I finally had to turn it off FIVE HOURS later, a little breathless, and wondering where this show had been all my life.

Bridgerton is a romance. But it's a romance that presents itself with delightful modern touches. The cast is incredibly diverse, and everyone is very easy on the eyes. The story that we get in this first season follows Daphne (played by Phoebe Dynevor) who is the eldest of the Bridgerton daughters. As she enters the very competitive dating and hence "to marriage" market to avoid becoming a spinster, there are all kinds of things that I found fascinating, from the presentation to the queen to the idea that someone increased their dating value if they were seen being wooed by nobles with powerful titles.

It manages to put a spin on the old idea that love isn't found but constructed. However, true love (like a lightning bolt) will cause people to leap on horses between two men dueling with pistols (because what could possibly be more romantic than that?). And you know what? it works.

The charm at the core of this story explodes when two willful young people decide to manipulate the circumstances of betrothal by pretending to be in love so that they can help each other. Only...you guessed it...they actually fall in love. Added to all of this is the breathless reporting by an anonymous writer who goes by the name, "Lady Whistledown." And what Lady Whistledown issues in her scandal sheet is snapped up and read by everyone. In a way, it's the narrative voice of Lady Whistledown that adds the dash of whimsy to this whole tale. It's a perfect match to the music, the amazing costumes, the colorful and elaborate sets, and the gorgeous scenery of the promenade. And the voiceover for Lady Whistledown is done by none other than Julie Andrews. So it's fabulous!

Shondaland makes great television, and Bridgerton just may be the favorite I have ever seen from this company, which is saying a lot considering both Grey's Anatomy and Scandal are from Shondaland. If you haven't watched Bridgerton, you owe it to yourself to give it a try. I bet it sucks you in like it did me.

Oh...and did I tell you that there are books? I discovered that fact this week as I was raving about the show, and one of my co-workers said, "The books explore all the Bridgerton stories." I paused and asked, "There are books?" I guess I have some reading in my future.

And honestly, with all that's going on in the world, couldn't you use a distraction? Time for a little romance, y'all. Have a good weekend. Want to hear the opening credits song? Click below.

Posted by Michael Offutt, Phantom Reader at 10:14 AM