Despite what Rotten Tomatoes has to say about it Wonder Woman 1984 was an excellent movie. 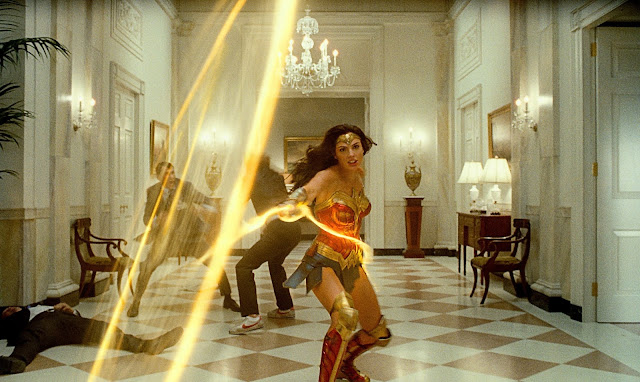 Today, I'm going to talk about Wonder Woman 1984. So, there are spoilers ahead if you haven't seen it.

To anyone that knows me, it was no surprise that I loved this show. I've now seen it three times. Wonder Woman is a character I've always loved, and I think that her story is much stronger than other female superheroes of the same caliber both on the Marvel side and on the DC side. Additionally, I'm able to look past C.G.I. flaws that most people don't seem to be able to do. I didn't think that Cheetah looked bad (people compared the Cheetah we saw at the end of the movie to the C.G.I. "cats" that appeared in the awful movie adaptation of Cats). I also wasn't disturbed when they substituted Gal Gadot and the kid she rescues off a road in Egypt (before getting run over by huge trucks) with a rubber dummy. I actually didn't notice that trick until I saw someone complaining about it and then slowing the video down to 1/100th of the speed so that we could see it was a dummy.

Okay then. But the illusion was real for me. If anything, the one thing that irritated me about the whole experience was that the movie came out on Christmas Day. That allowed family members of mine to hold the film "hostage" while I participated in the parade that is Christmas with lots of conversation (socially distanced) and enforced social participation. I usually don't mind these things, but it was especially difficult knowing that there was something really fun that I wanted to do, and I was being prevented from doing it due to familial obligation. If you remember, this shouldn't have happened. The original release date for the movie was June 5th. Then it was pushed to August 4th. And then it was moved to October 2nd. And then they were like...Christmas! Let's make it a Christmas movie!!

And it wasn't a movie that came out at midnight on Christmas Eve. Oh no...you had to wait until noon on Christmas day to watch it, which pretty much guaranteed that you'd have to see it...as a group...with people who aren't into comic books.

So yeah...nationwide...people who were into comic books had to sit next to people that weren't even aware of the movie and that comic books are a thing read by adults. People sat next to women in their seventies all dolled up for Christmas (and who wanted to drink wine and talk about past exes) who were like, "Oh...who is this again? Oh...sorry...I'll be quiet." Or..."How long is this movie? Does that woman know that young man from something? Oh...this is a series? What's that? The last movie I saw was with my grandkids in January and that didn't make sense either. I don't have the Netflix. Oh poo...why is everyone's attention on the screen? I wanted to get some attention today, because 'the rona' has left me all alone...."

But getting back to the movie, I honestly just loved the way Patti Jenkins crafted the narrative of this sequel. Plus, I got to see the invisible jet, we got more Themiscyra bits (I love anytime we get to see the Amazons on Themiscyra), we got tons of lasso moments (she swung from frickin' lightning bolts), we got the Alex Ross "Kingdom Come" gold angel suit, and we got to see Wonder Woman fly in an achingly beautiful segment that happens due to grief at having to renounce her one wish, which means she will lose Steve Trevor yet again. The chemistry between Gal Gadot and Chris Pine is palpable, and I was fully drawn in and invested in caring about this story and this heroine.

I know Wonder Woman 1984 is "rotten" on Rotten Tomatoes, but that definitely is/was not my experience. It's a beautiful film, and when I watched it with some younger friends of mine who are into comic books (and who aren't poisoned by a political brain), they were also left breathless by the awesome parts of it. I feel like the ones who are truly jaded are just fundamentally different people from me, some being toxic narcissists that express or harbor a lot of anger with regard to creative expression of progressive ideals. It gives them an excuse to critically tear a thing apart, while using their genre expertise to express dissatisfaction at the way a thing was portrayed. It's the same kind of thing that you see when progressives tout $2,000 stimulus checks and conservatives shoot it down with all kinds of logical arguments from, "We believe people should work and not be given handouts" to "let's try to be fiscally conservative." But then one of their own says, "Let's do $2,000 stimulus checks," and they say, "We were stopped by the other party! It's their fault! This is a great idea!"

Whoever said that politics does not affect your every day thinking is 100% wrong. It affects everything, including what you accept as actual reality.

Anyway, I love Wonder Woman 1984. I'm glad it dropped, and it hit all the inner pleasure buttons I possess for this kind of thing. It made me miss the eighties. But I'd like other movies that are released simultaneously to video to avoid being dropped on Christmas. I know it won't happen...but wishing otherwise doesn't hurt.