Season Five of the Expanse is science fiction that is so good it stands alone above everything else. 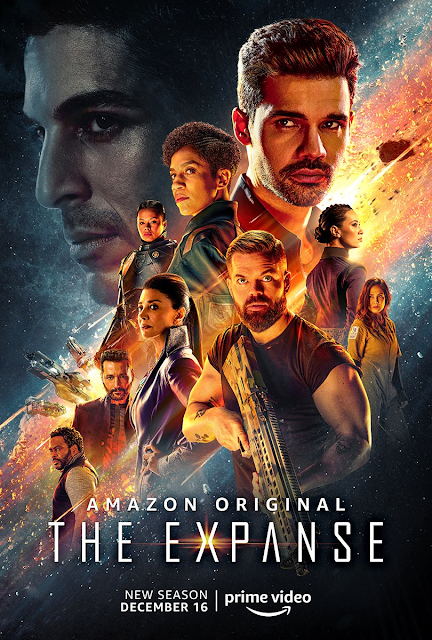 I've been watching season 5 of The Expanse. If there is one criticism I can give the series it is this: I really love binge watching. Having to wait a week to continue the story does let some of the air out of the balloon. I guess that Netflix has kind of spoiled me. That being said, I get why they do it. Getting people to stay subscribed while they come up with something else that will make it hard for you to cancel your subscription is how they make their money. Right now, I'm a little disappointed with the Apple streaming service for this reason. However, Cherry, the new Tom Holland film is due very soon and then Isaac Asimov's series adaptation of Foundation is landing there as well. So...I may not cancel Apple+ just yet.

However, the Expanse is on Amazon Prime. So, I'm not sure why they like to string it out like Apple+ and Disney Plus. There seems to be plenty of incentive to keep people subscribing to Amazon Prime. But I do have my thoughts on this. Maybe they just want people to not question the Amazon Prime subscription? Something like...hmm...maybe I'm not getting my money's worth on Amazon Prime, but...if I cancel...I can't watch the new episode of The Expanse. Totally worth it plus the free shipping and other things. Nevermind and then dismiss thought. Maybe that's what's going on.

This season of The Expanse is the penultimate season. Even before it made its premiere in December, Amazon said that season six would be the last season for this science fiction series. I'm okay with that (to be honest) as the narrative of the series reaches a big conclusion in book six, after which there is a multi-decade time jump. Thus far, I'm impressed with the special effects, and I'm glad they got the actress back that played "Peaches," a.k.a. Clarissa Mao. I think that the meteors striking the surface of Earth could have been done with more spectacular fanfare, but it works. It looks realistic, and it's satisfying to see a "scorched Earth." Maybe I was expecting something closer to a disaster porn movie like "Deep Impact," which had a fantastic "comet strikes earth" scene. Actually, looking back on it that was the only scene worth watching in that movie.

Season Five has been an incredibly good season, but that's pretty much par for the course for this series. I said it all in the title above: the Expanse is science fiction that is so good it stands alone above everything else. That being said, I do have some random thoughts. For one, I do think that they are setting up Bull to be the next Roci pilot, because they fired Cas Anvar due to his sexual assault allegations. Second, I also wish that Bobbi was getting a little more screen time this season than she currently is. Bobbi is a great character. There's a scene in book seven when Amos and Bobbi get into a huge fight. I love this scene, because Bobbi actually takes down Amos, which we've never seen anyone do before. I hope we get to see that next season in some capacity, but we probably won't. That's probably my biggest regret at knowing that next year's Expanse is the last one we get.

To take stock at this point in the season, it is impressive at how the showrunners have been using the series as a way to remix and improve certain parts of what was already one of the best science fiction series I've read...like ever. It has delivered on everything I hoped it would. And space battles on The Expanse give me life every time I watch them. They are so good.

I'm going to miss this series when it finishes. At least we get book nine this year, which is also the last of the books. Sigh. I hate to see good things end. However, when good things don't end, they turn into the Walking Dead, which was a series I followed for many years but finally gave up on. In my head, some things can (and often do) outstay their welcome. I should be glad that the Expanse is not one of them.

Posted by Michael Offutt, Phantom Reader at 9:08 AM

Email ThisBlogThis!Share to TwitterShare to FacebookShare to Pinterest
Labels: The Expanse, The Expanse is science fiction that is so good it stands alone above everything else