The Dark Crystal Age of Resistance is a strange show. 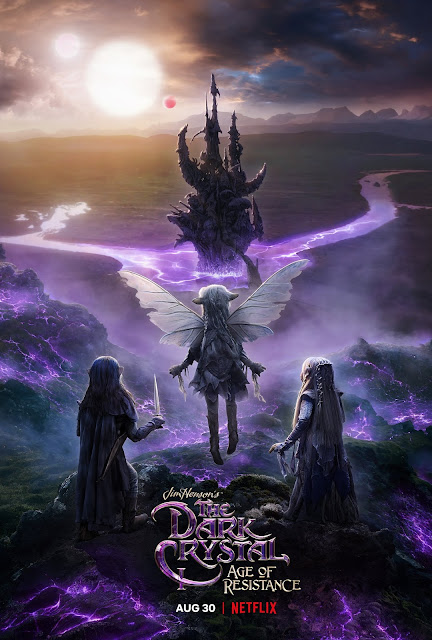 There are spoilers in this post for Netflix's series, The Dark Crystal: Age of Resistance.

I should have expected this, but my fondness of the things in the Dark Crystal movie are separated by a gulf of time and a lot of nostalgia. I'm about 70% done with watching the Age of Resistance show on Netflix, and I am having fun with it, but it's just super odd in its weirdness. However, it is very Jim Henson. So I think they nailed the things the great puppeteer loved when he was alive, and I think they've done very well by his legacy. Here are a few of my strange observations:

1) The podling scenes remind me of a personal friend who drives truck. He makes strange loud noises with his face, and it just makes me picture my friend doing that every time I see it on the screen.

2) The world of the Dark Crystal feels very original and richly detailed. Most fantasy genres will play on elves, dwarves, gnomes, etc. and just go with that. The Dark Crystal doesn't lean on any well-established fantasy races. It has its own races, who come across as very authentic despite the fact that the puppets don't display much range of emotion.

3) The rock golem creature is asymmetrical. It messes with my sense of rightness every time I see it on screen and just weirds out my eyeballs. So there is that.

4) The carriage that the Skeksis use is powered by giant pill bugs that roll on the ground and respond to electrical shock. I just gotta say, those things go really really fast. Surprisingly fast. And they are all-terrain, basically making the royal carriage into a monster truck.

6) The gelflings strike me as an entire race of well-meaning, compassionate, but ultimately defenseless (because they are kind and respectful) creatures who are into granola bars and hugging trees. It's all quite lovely, but in any version of the comic book story, The Walking Dead, these are the people that all died to the zombie menace within the first week. They just aren't equipped to handle anything truly evil.

7) Aughra is the most irresponsible wizard, and is definitely a far cry from Gandalf. She slept most of her life away, caring not for the job to which she was assigned. Then when she realized something was amiss, it was pretty obvious that it was because the crystal had gone dark and was being abused. It was also very apparent that the Skeksis were responsible and evil. She had several opportunities to just go to the tribes and tell them personally and help the gelflings prepare for war. But rather than do that, she decided to wait around the base of a tree to see if the earth would eventually teach her its song again. That seems like a colossal waste of time.

Anyway, I'm enjoying the show, but its definitely weird. It also does not shy away from gross things, which was another surprise. Who knew puppets could be so gross. I could have gone the rest of my life without seeing a Skeksis sending out three streams of urine...but ya know...that's just a thing I saw that I can't unsee.
Posted by Michael Offutt, Phantom Reader at 12:59 AM