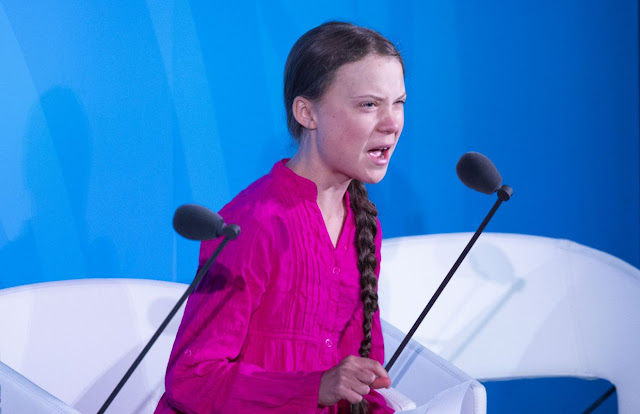 Unless you've been living under a rock, you probably heard Greta Thunberg's emotional speech given at the U.N. Climate Action Summit this week. Lots of news agencies have covered it. But in case you don't know, she's a climate activist, and she is sixteen years old.

Just to get some political housekeeping out of the way before I dissect a small part of that speech that I was intrigued and horrified by, I want you to know that I agree very much with Greta. I also hope that her message prompts change, but the pessimist in me feels that it was just a bunch of wasted words. And in a way, she showed why they are wasted words in her own speech with this single paragraph (the bold is my emphasis and not hers):

"You say you hear us and that you understand the urgency. But no matter how sad and angry I am, I do not want to believe that. Because if you really understood the situation and still kept on failing to act, then you would be evil. And that I refuse to believe."

It honestly reminds me of something I read in A Diary of Anne Frank a long time ago: "In spite of everything, I still believe that people are really good at heart." And then...well, you know...she was caught and executed by Nazis.

So here's the thing, folks (and the point of my writing this): Ignoring evil is a good way to end up dead. It's a simple concept, and one that I find gentle-hearted people don't seem to grasp (and this statement stems from my own beliefs).

The universe owes any single one of us absolutely nothing. It cares not. Evil that is not rooted out and actively punished will find a way to grow. Denying that it exists is just stupid. There are plenty of evil people out there. They cannot be rehabilitated. They cannot be reasoned with. Even Game of Thrones rests its roots on this very basic concept: the world is only changed from the rule of tyrants through Fire and Blood ("Fire and Blood" being the Targaryen way of dealing with evil). And unfortunately, we saw in Game of Thrones that to employ "Fire and Blood" makes you "evil." So it's a catch-22. However, unless you're willing to get your hands dirty, then True Evil is just going to ignore everything you say and keep on going on.

But, on this Friday, I tip my hat To Greta Thunberg. I hope she proves me wrong. After all, I'm sure just one more impassioned speech from an innocent girl would have changed Cersei Lannister's mind, and the death of King's Landing would not have been necessary. We can all hope, right?
Posted by Michael Offutt, Phantom Reader at 7:15 AM