Will Grand Admiral Thrawn appear in The Mandalorian? 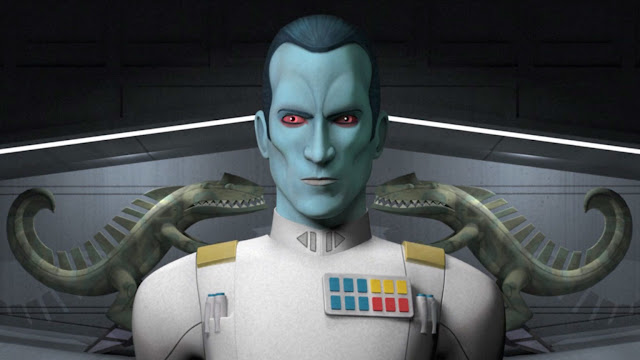 Will Grand Admiral Thrawn appear in The Mandalorian? It's an interesting question. If you don't know who Thrawn is, he was first introduced in the book Heir to the Empire, which came out about the same time as I was attending college in 1990. It's written by the author, Timothy Zahn, and featured a cunning villain by the name of Thrawn, who studied art pieces produced by a civilization in order to develop strategies by which he could defeat them. In the course of the series, it seemed to work quite well, and I have my own personal theories that Thrawn was based upon Hannibal Lecter, and that Timothy Zahn was an admirer of Thomas Harris (the author of the Silence of the Lambs). Thrawn is a very Lecter-esque villain, minus the whole cannibalism thing, because Star Wars doesn't allow that kind of thing to be portrayed on screen.

Thrawn has appeared in the canonical animated series (like The Clone Wars for instance), so we do know that he is a character that exists within the framework of the Lucasfilm live action storyline. What I find interesting is that the showrunner for The Mandalorian, Jon Favreau (you may know him as Happy from the Marvel films), seems to hint rather heavily that Thrawn may make an appearance. It's an interesting and exciting thing to think that Disney is actually contemplating bringing the worlds of the television show and the movies together into a more cohesive package. There are astounding revelations that came from the animated series. Darth Maul is still alive is one of them, and it was confirmed when we all spotted him at the end of the movie, Solo. But if we meet Thrawn, then there's also a chance that we'll meet heroes like Ahsohka Tano, and that just gets me all kinds of excited. Ahsohka was an amazing character, and if we meet her, I think it may be enough to really energize the whole franchise.

Disney (in launching their streaming network in November) feels very much like it is breaking ground on storylines that sorely needed to find new directions in which to grow. Mining the expanded universe of Star Wars (for example) for gold nuggets seems like a great place to start. I wonder what all else may turn up as discussion points, and what we will actually see come November.

So what about you? If you are familiar with the character of Grand Admiral Thrawn, would you be excited to see him in the live-action t.v. series? I'll look for your comments

Posted by Michael Offutt, Phantom Reader at 12:51 AM