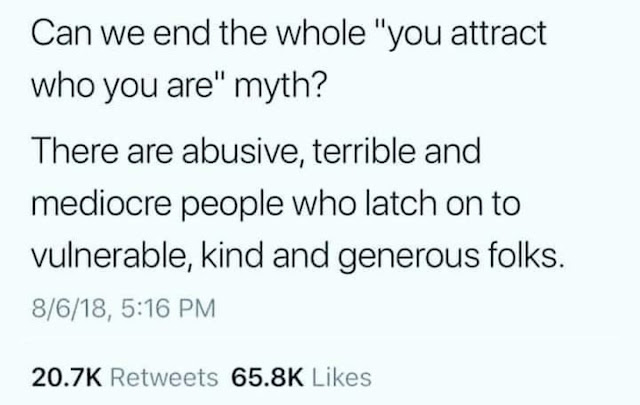 This meme appeared on my Facebook yesterday from a friend who shared it from the Utah Harm Reduction coalition. A bunch of people liked it and passed it on, but I don't think people actually "read" it or even know what "mediocre" means.  The word "mediocre" just means "ordinary." So this meme is suggesting that vulnerable, kind, and generous folks are "extraordinary" and that attracting "ordinary folk" is a toxic burden. It was the most pretentious thing I've read in some time. Why do I use the word "pretentious?" Allow me to explain.

First, you should know that I consider myself to be an ordinary person, and I can tell that whomever wrote this meme is (in Southern language) "putting on airs." In other words, they think they are better than me, and I'm like...whaaattt? Did you not get the memo that being vulnerable, kind, and generous does not make you extraordinary? There's lots of people who are vulnerable, kind, and generous. I work with hundreds of people who define this every day. There are millions and millions of people who are vulnerable, kind, and generous. The antithesis of this, psychopaths, make up around 4% of the population (I got this statistic from a book called The Sociopath Next Door). This means that 96% of the population of the United States could probably be said to be at least "kind" and "generous." Charity is huge here. So what the hell is going on? Why does someone who wrote this meme think this qualifies as extraordinary? Why is "mediocre" lumped in with the words "abusive" and "terrible?"

The non-profit organization Utah Harm Reduction is an organization interested in promoting safety and well-being among a population of substance consumers. I get that. I know some ravers and partiers who get super excited to dance under an electric sky, to engage in P.L.U.R. (Peace, Love, Unity, and Respect), and they like their ecstasy and other drugs because it's fun and allows them to escape the banality of existing in a world which doesn't appreciate them all that much. Done. I understand and wish them all well on this journey. But using drugs, enjoying music, having public sex, wearing costumes, and saying "f*ck you" to the establishment does not make a person extraordinary. Not in my book, at least. It just makes you human. Congratulations, you do what you want. You pierce what you want. You tattoo what you want. You sleep with whom you want. It's nice to have freedoms and welcome to the human race. People have been doing this kind of thing for thousands of years. You are not extraordinary. You are, in fact, ordinary. And if you look at your life, and see how far you've come and what achievements you've put under your belt without the aid of others, you will probably see how ordinary you are. In fact, you may only be in a good place in life because you had the "luck" to be born in a country and a society which has allowed these things to flourish.

But here's the thing: being ORDINARY IS NOT BAD. I'm an ordinary guy. Everyone I work with is ordinary. I play ordinary games like Dungeons & Dragons, I read ordinary books (some of which are actually written by extraordinary folks) and I listen to music (a lot of which is produced by extraordinary folks). There are plenty of extraordinary people out there, but that's only because we have a world population of 8 billion. One percent of 8 billion is still 80 million people who have talents that are mind-blowing. Take Kodi Lee from America's Got Talent or Simone Biles, the Olympic gymnast. These are people who are truly extraordinary. And here's another moniker of the extraordinary: they usually make their mark on the world by their early twenties if not their teens. If you are past thirty, and you are not well known, chances are...YOU ARE ORDINARY. This isn't to mean that you cannot be successful and make it into the middle class. The Middle Class is full of ordinary people who drive cars, own houses, and can even afford cars like a Mercedes Benz or a Range Rover. Lots of middle class "ordinary" people live fulfilling lives, pumping out a few kids, getting married, getting divorced, smoking weed, and sexting with a partner or multiple partners (if you're into polyamory--which is also not extraordinary by the way).

This "idea" that I'm seeing where individuals hold onto a belief that they are extraordinary is toxic and poisonous. People who think they are extraordinary will not want to do everyday tasks that people need to do in order to live a healthy life. They will miss opportunities for love, because they believe someone is beneath them, and they will wait for a truly extraordinary person (or opportunity) to find them (and this will never happen). They will have unrealistic expectations about life, and they will come up wanting. And the thing is...all of this will lead to a mental health crisis. We will see enmasse depression and anxiety cropping up in the population, because that's what happens when people have unrealistic expectations about reality: you get depressed. It's honestly not rocket science.

I wonder (deeply) how we even got here as a society? Why are there so many normal folk who think they are better than others, and what kind of damage is going to be inflicted upon our society as a result? Can we please not demonize the word, "ordinary?" If you do, you risk not only demonizing me, but demonizing yourself...as you are more than likely an ordinary person (especially true if I know you personally).
Posted by Michael Offutt, Phantom Reader at 12:04 AM

Email ThisBlogThis!Share to TwitterShare to FacebookShare to Pinterest
Labels: All greatness comes from mediocrity, I don't think people understand what the word "mediocre" actually means