What is there for Obi-Wan Kenobi to do in his own series eight years after Revenge of the Sith?

There's a lot of people who think that the Disney + streaming service is going to save Star Wars. It seems like a bit of an overreaction given that there seems to be an insatiable appetite for all things Star Wars. I guess when movies like Solo and The Last Jedi fail to hit certain expectations, despite it still making buttloads of money, the general "overreaction" seems to be to panic and then claim that the whole thing is now destined to go straight down the toilet.

I (among many) am looking forward to the streaming service's launch in November, not just for original series like The Mandalorian and the Obi-Wan Kenobi series (starring Ewan McGregor as Obi-Wan), but for the other Marvel series that have been announced. However, I've got to say that after my initial joy of hearing that Obi-Wan was getting his own television series post Revenge of the Sith, I started to wonder what that might look like. And given what I know of what happens, it's actually starting to sound a bit boring.

From what I know, Obi-Wan basically watches over Luke on Tattooine until he's an old man, occasionally going into Mos Eisley for supplies and a drink and to rough some people up, but he's essentially retired. I mean...there's some obvious drama that could happen between Uncle Owen and Obi-Wan...the comics have hinted at this much in panels like the one below: 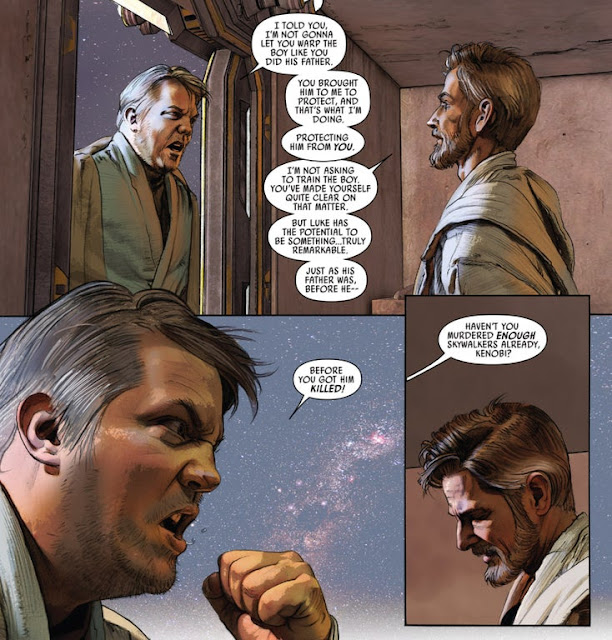 But how could stuff like that fill a series? The above conflict would be a single episode that I'd watch. And we know what happened...Luke Skywalker by the time of A New Hope barely knew Ben Kenobi. So he spent zero time around him (his uncle having won the argument against Ben training him).

I'm also hoping that it's not a whole series of things like a young Luke bullseyeing a womprat in his T-16 while Obi-Wan watches from the bluffs, using the Force to freeze them in place before each shot. That would just be silly. I'm hoping there's more to Obi-Wan than just hanging out on Tattooine. But with Darth Vader on the loose and the Emperor hunting down all of the remaining Jedi, it seems to me that hiding in one place might be the only thing he does for sixteen years. So what do you think? What is there for Obi-Wan Kenobi to do in his own series eight years after Revenge of the Sith? Any ideas? I look forward to your comments.
Posted by Michael Offutt, Phantom Reader at 12:34 AM

Email ThisBlogThis!Share to TwitterShare to FacebookShare to Pinterest
Labels: Disney +, Obi-Wan Kenobi, Star Wars, What is there for Obi-Wan Kenobi to do in his own series eight years after Revenge of the Sith