Deception is a remarkable thing. 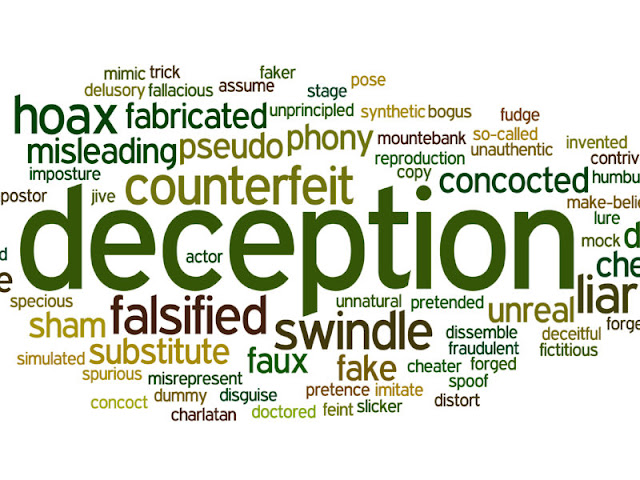 I know several deceivers, and they are small time creatures who weave webs of lies to cocoon themselves within their own realities. What strikes me as remarkable about this is that it seems so apparently obvious to me, yet it isn't obvious to their families and even one fiancée in particular (you'd think that a fiancée would know, but they don't). Though I don't care all that much, I wonder why I'm able to see things that they are not. And I think it all boils down to one thing: the family and the fiancée want very much for life to appear a certain way. The fiancée does not want to be single, and I think she believes she is running out of time with one failed marriage already under her belt. I believe she's put a lot of time into this relationship, and that she just doesn't want to see anything wrong with it. It's like a cost vs. benefits thing. "There's no effing way that I've spent this kind of time investing in this thing and I'm not gonna get a reward for it!" It's like a cognitive dissonance or something similar....

What the family wants is a bit different. They want things to be defined a certain way. To them, bad people look like non-whites who are flashy in the way they dress (or sexual). Bad people are the ones with the tattoos, the ones with the piercings, and the ones who are blatantly honest with their sexuality. A person who is very open and has no problem saying, "I'm gay and I like dick," is a bad person not to be trusted with underage boys because (obviously) they are just waiting to molest. But a person who is closeted, who outwardly says all of the right things...the deceiver if you will...is the person they invest with all of the trust. It's truly baffling, and all of the signs that they are "in the closet" are right there (and perhaps up to nefarious things). But it's not worth digging any deeper to them because it might spoil what they really want (a Norman Rockwell life?), which in my opinion doesn't exist.

I've come to observe that a willingness to take lies as truth comes from fear, and I wasn't expecting this. I have a very healthy and honest relationship with fear. If I'm afraid of something I say it. I also embrace fear in many ways, realizing that (as an emotion) it's purpose is to keep me safe. But I've never been struck by a fear of truth (I guess) because I've always embraced truth and didn't care what other people thought of me. I'm gay, I'm fat, I'm two years from my fiftieth birthday...all of these things are true and I don't care. I say blunt things because this is how I think and I feel bluntness is good and solid communication that has no risk of being misunderstood. When people I've barely met ask to use my computer, they act stunned when I say. "Yes. But I should warn you that there's naked pictures of guys on there so don't open certain folders if you are offended by that kind of thing." I just don't care, but I'm also comfortable living a life alone. I've had people say to me over the years, "You are so courageous for living alone like this." I usually look puzzled and say, "Um...I like living alone. This isn't torture you know?"

One of my friends even said, "Living like you would make me want to commit suicide." I think I was eating ice cream and watching t.v.  I was like, "What?" And they clarified, "I just don't know how you do it?" And I was like..."Do what? Eat ice cream?" And then they started saying how it must be miserable to be single, and I quickly said, "Look, I only suffer from loneliness or depression honestly about once a month or once every two months. I actually love all the space I have and I love being single. It's great. I go to movies all the time, and I only have to buy one ticket. I never have to arrange myself around anyone else's schedule. I eat what I want every night. I watch what I want. It's actually pretty great." But they would have none of it. They thought I was miserable.

There's a weird kind of shaming that happens with our society around folks who are single. We must all be the biggest losers that humanity has ever pooped onto the Earth, and we must all be suffering and one inch away from suiciding out. But that is not the case at all, I assure you. But it's this "idea" and "fear of being single" and "going your own way" that opens people up to deception. It's the idea that there is only one formula for happiness, and that if you stray from that formula, well you're basically f*cked so you should accept anything that happens to you (or that is told to you) as long as it preserves the formula for happiness. It's complete and utter bullshit. And it makes me think ultimately, that a lot of people are not equipped to detect deception, because ultimately they don't want to do just that. Essentially, people find comfort in being lied to as long as it fits the formula for happiness. What they don't like are the things that threaten to derail the formula for happiness. Even if these uncomfortable things are facts and are completely true, they will be labeled as lies by people in order to preserve what they know.

That is so messed up. So yeah...deception is a remarkable thing. And it's just another layer of what it's like to live in this messed up world. Do I have any advice to people out there who want to be able to spot deception and to be free of it? Yes, and it's actually pretty easy. Embrace the fear of being alone. Embrace the fear of walking a path alone through life. Be your authentic self. Get to a point where you don't care what people say about you. Get to a point where you are not dependent on anyone else, and you can truly say "No" to opportunities (because if you wanted to you could just do them yourself). Once you've arrived at that point, you will spot people who are lying to you. You will unmask the deceivers and the manipulators.  And you will probably learn something about yourself along the way.
Posted by Michael Offutt, Phantom Reader at 12:02 AM

Email ThisBlogThis!Share to TwitterShare to FacebookShare to Pinterest
Labels: Blogging, Deception, Deception is a remarkable thing, The Psychology of Men