The ever evolving ways in which Dungeons & Dragons tackles gender. 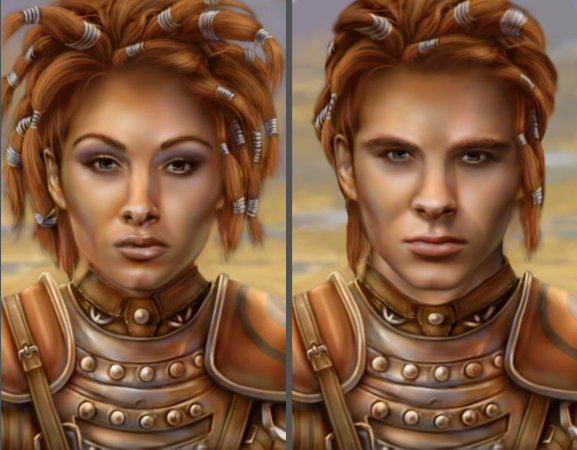 I've played Dungeons & Dragons almost since the very beginning when it came out in the early eighties. If you are at all familiar with its pop-culture influence, then you've probably seen it in the Netflix series Stranger Things as well as in big budget blockbusters like E.T. or other films that have boys playing games with each other. In the beginning, the games rules were just black and white photocopy sheets that came inside boxes with colorful fantasy art on them and weirdly-shaped dice made of plastic that chipped (because it was cheap stuff) as it was used. You also had to fill in the numbers with a white crayon so that you could see them better.

Back in those days, there was a cursed magical item that mean Dungeon Masters would inflict on players within the game who were involved in operating a "character." And to explain the mechanics of this tabletop rpg, I'd like you to think of it as a fictional character in your favorite book brought to life in a living story, and you may understand the appeal. The Dungeon Master would create a world for your character to live in and give him or her challenges (back then there were no non-binary folks). The cursed magical item was called a "Girdle of Masculinity/Femininity," and it was pretty awful. It looked like any other kind of magical "belt" that you could stumble across in the world, and most of these things bestowed fantastical strength (a prized virtue for being able to do the most damage and be the instigator of heroic feats). But sometimes you donned one and it was this cursed item. The effect was instantaneous and virtually irreversible: your character would switch sexes and you'd become the opposite of what you were.

For a game that was played mostly by children, this was heavy stuff and a great source of ridicule for the victim. Most DM's that I knew quickly realized they'd crossed a line (when they'd given out this kind of item) and reversed what had happened to the character in remarkable ways. And it's this struggle to deal with how important gender-identity actually is, that I find fascinating about characters in which people are extremely involved.

In the modern edition of the game, 5th edition, the "girdle of masculinity/femininity" is just simply gone. I looked for it in my Dungeon Master's Guide last night and couldn't find it. And maybe that's a good thing, but I started to wonder why. Maybe someone at Wizards of the Coast (the parent company of Dungeons & Dragons) realized that "gender" needs to be taken seriously, as does transitioning from one to the other. And maybe (in the end) it is too big a topic for tabletop RPG's to deal with in an official stance, by providing a "cursed" item that inflicts a gender change.

I did see one iteration of this item about ten years ago in a previous edition of the game. Renamed the "Girdle of Gender Change" it now offered options that were random depending on a dice roll. The wearer could end up as a non-binary person, stay the same sex, or turn into the opposite sex. But even this was probably not enough to cope with our ever-expanding definitions (as a society) of what gender actually means.

To give you a clue (in case you don't know) in the modern world we now have 26 different sexualities and 39 different genders/sex. The complete list is HERE. It's a fascinating read, and I understand why a troublesome item such as a "Girdle of Masculinity/Femininity" is no longer something that one should even have as a magic item. And even if it were still around, could it still carry the "cursed" moniker without offending someone?

For what its worth, tabletop roleplaying games have come a long ways to tackling gender and sexuality. The new module called Curse of Strahd features a vampire in it that swings both ways just in case male to male would fit better in a story than the traditional male to female. You also frequently run into npc's who are clearly either the same sex and in a relationship (or are clearly mixed race). And you even run into gender swapped characters, who have had surgeries to become something that they were not born into or have embraced magic to accomplish this. None...and I really do mean none...of this was around in the eighties. Along the way there have been foibles, enraged parents, upset players, and people who just didn't know how to deal with this item, much less the gender identities of characters being played by people who wanted to participate, but who also wanted to feel included.

I never would have thought back in the eighties when I was a person with far less worldly experience that gender is/was as important as it is. But I suppose my first introduction to its importance came through a tabletop roleplaying game. So maybe, even after all these years, it just might be one of the best vehicles for people to come to understand it better and appreciate gender in all its diversity.
Posted by Michael Offutt, Phantom Reader at 8:07 AM