A Fairy Godmother still bitter over being used by Cinderella takes her anger out on Puritans in Salem in the latest Legends of Tomorrow and it was wonderful. 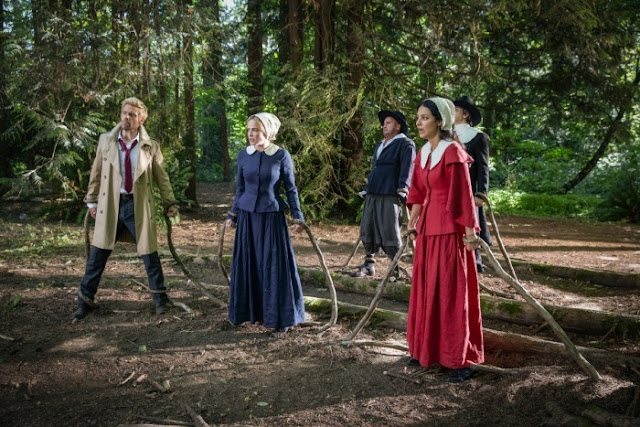 Last night's Legends of Tomorrow was awesome. As in the heading above, a fairy godmother who was still bitter over Cinderella (and girls with a princess complex in general) decides to offer her services to a girl living under Puritanical rule in old Salem, Massachusetts. And by help out, I mean using her magic to rain fire and brimstone down upon all the girl's enemies and then kind of goading the girl on so that she can use her "wish-granting" powers to much more satisfaction than manufacturing glass slippers (which apparently are terribly uncomfortable and bad for the feet). Additionally, John Constantine just can't send the fairy godmother to Hell either (for tampering with the timeline), because the fairy godmother must first be rejected by the girl or Constantine risks sending both the fairy godmother and her charge to Hell as a package. As that's not what heroes do, they need to figure out what the girl Judith needs and then see if they can meet those needs using the significant resources of the Wave Rider and all of their talents so that Judith eventually chooses to release herself from the care of the fairy godmother. Fun, right?

I don't think I'm understating this when I say that Legends of Tomorrow is the gift that keeps on giving. As far as all of the CW shows go (Arrow, Supergirl, and The Flash), Legends of Tomorrow is my favorite. It's just plain campy fun, and it always surprises me. Last week's episode had a unicorn with a rainbow mane and tail running around the famous 1969 Woodstock concert killing stoners (and then eating their hearts because unicorns all eat human flesh) until the Legends put a stop to this (with cameos of Jerry Garcia and Janis Joplin along the way). This week's episode had a Disney-esque fairy godmother (complete with songs that put Ray in his "oh so happy" place") protecting a young girl whose mother was accused of being a witch in the Salem witch trials of the 1600's. The contrast between costumes (Puritan pilgrims versus everything else) just makes for pure hilarity (as does all the glitter and sparkles). But despite all the fun in last night's episode, I still had thoughts (of course I did which is why you read this blog):

1) Why did Nate never consider turning into a superhero made of steel (like he does) to show his father that supernatural things exist? This seems obvious to me, but instead he goes looking for evidence of magical things. Which leads us to...

2) How could Nate speak pig? It was really cute that he could communicate with Ray after he'd been transformed into a piglet, and it set up the super fun transformation when Ray suddenly became a man (completely naked in Nate's arms) in front of his dad. They got bonus points for not flinching even once. Yay! It's refreshing to see gayness embraced so whole-heartedly by a show like this.

3) Beebo Blox needs to be a real game like candy crush or something similar. The episode where Beebo destroyed the huge demon that ended last season has to be one of the best season finale's I have ever watched.

4) It's weird that the Legends don't get paid for doing the work that they do. I never thought of it before, and I'm glad they brought it up in this episode. Nate didn't even have enough money to take his dad out to dinner, but now he's got a salary and will be working for the Time Bureau. I think that's a good place for him.

5) Mick and John Constantine...this is going to continue to be fun. I love that they butt heads in sharing the same space. However, it wasn't entirely unexpected.

Legends of Tomorrow's got a great thing going on in that it doesn't take itself too seriously.  And there's always this point: I think there's too much darkness in the world already. We all could use sparkles, rainbows, and a song or two, right? I'm going with "Yes" for this one.
Posted by Michael Offutt, Phantom Reader at 12:05 AM

Email ThisBlogThis!Share to TwitterShare to FacebookShare to Pinterest
Labels: A fairy godmother still bitter over being used by Cinderella takes her anger out on Puritans in Salem in the latest Legends of Tomorrow, Legends of Tomorrow