Aquaman is a hated character among my nerd friends so I bludgeoned them with puns when the five minute trailer dropped. 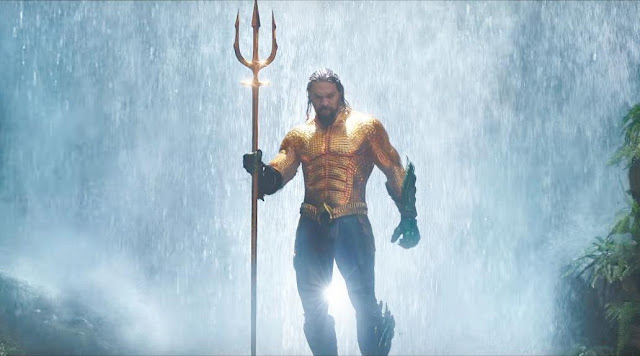 Last week, the five minute trailer for Aquaman dropped, and it got me really excited to see it. But it was also a goldmine for irritating my friends (who hate everything D.C. and absolutely will not see an Aquaman movie). Because "raving" about it would invite all kinds of attacks that I wasn't in the mood to fight off, I used as many puns as I could grab, and it elicited a few chuckles instead. So here I am to "pun"ish you with them. Feel free to borrow any of them if you like :).

"The length of the new Aquaman trailer seemed fishy, but it had an ocean of content."

"I think everyone that goes to it will have a whale of a good time."

"There's a wave of positive enthusiasm coming out of Comic-Con. I surfed some of the reviews."

"Jason Momoa can coast on his perfect casting."

"Does anyone want to shell out for a ticket?"

Anyway, I hit them with like eight of these within a minute. My most critical friend, Jake, just rolled his eyes (he truly hates DC movies). As far as trailers go, I think it's pretty good as it just shows most of two really specific scenes and what goes on in them. You get to see Black Manta shooting lots of eyebeam rays, and some pretty cool destruction as well as some humorous elements courtesy of Jason Momoa's comedic timing (he's kind of playing Aquaman like a big dumb jock in parts). It seems to have worked for Chris Helmsworth (as Thor) so why not?

Honestly, it's kind of refreshing to see DC take on the other heroes like Wonder Woman and Aquaman. Without even knowing too much about it, I'm also rather excited for the Flash movie to come out at some point. I know that Batman and Superman are both moneymakers for Warner Brothers, but I'm kind of sick of both of these heroes. They have been explored ad naseum, and it's fun to see other things in the spotlight. It may be where D.C. begins to find its strength. Maybe we'll see a Dr. Fate movie someday or perhaps a Teen Titans live-action movie.

If you haven't seen the trailer, give it a look below:

Email ThisBlogThis!Share to TwitterShare to FacebookShare to Pinterest
Labels: Aquaman, Aquaman is a hated character among my nerd friends so I bludgeoned them with puns when the five minute trailer dropped