Smallfoot delivers a few great messages to its audience in its cleverly written screenplay. 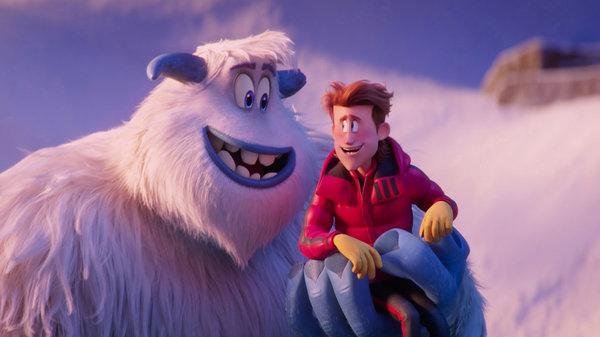 I watched Smallfoot with two friends on Wednesday evening. This Warner animation offering had a kind of brilliant screenplay. Warning: Spoilers ahead. It took the whole Bigfoot legend and turned it 180 degrees by telling the story from the sasquatch point of view. In particular, Migo (who is friendly) and lives in a village with other friendly Yeti's, engages in a lot of ridiculous activities at the whim of the "stone keeper," who is a kind of ideological leader. But unbeknownst to the yeti, their "stone keeper" has been keeping the entire population of Yeti purposefully ignorant of the way the world works by having them learn and memorize information on stone tablets while simultaneously encouraging them all to bury any questions they may have.

For one, they believe that a gong needs to be rung by slamming one's head into it in order to get the great glowing snail to march across the sky each day. In another instance, they believe that their mountain is an island riding on the backs of giant yaks that are beneath an ever-present bank of clouds which effectively conceals any view that the Yeti might have of the world at large. And of course, the Yeti's are in complete denial of the existence of humans whom they call "smallfoot." And then one day, Migo runs into an actual "smallfoot" who crashed into the mountain while piloting his plane above the clouds. The smallfoot gets away, and sets off a whole adventure for the race of Yeti who call this mountain home.

There are a lot of themes to unpack in this movie. Yes, it's cleverly written and funny and the animation is top-notch with great performances by Zendaya, Danny DeVito, and even LeBron James (all voice actors for different roles in the show). What I wasn't prepared for going into this, however, was how an entire race of yeti living on a mountain would continue to go on being ignored by the modern people who obviously call this world home. And the movie answers that to great effectiveness by revealing what I wrote above: that there has always been at least one Yeti (the stonekeeper) that knew all the stone tablets were lies, but he kept the lie going in order to keep his people safe. You see, the first encounter between yeti and people didn't go all that well. According to their records, the people thought the yeti were monsters, attacked them, and almost wiped them out. So they fled into a mountain where people couldn't follow, and then created a machine that would spit out moisture every day to keep the fog bank swirling at a certain altitude around the mountain.

The telling of this story suggests many things to me: 1) It's important to question everything that an elder tells you is written in stone and has always "been this way" since anyone can remember. Books, especially those books that dictate rules on how one should live and which questioning of those rules is discouraged, are particularly suspect. I think we can all come up with an example of one such book that does exactly this that millions of people believe in without questioning. 2) Living a lie and hiding in a closet (or cave) and denying the truth about yourself only harms society. Integration and being proud of who you are and looking for allies among those who are different from you is a much healthier approach. It's also a way to build trust with those who are challenged in trusting you to begin with. 3) Sometimes the original intent behind a reason for doing things is forgotten, and it's important to identify when this happens so that people can revisit that intent and see if it is still applicable to modern times.

I really enjoyed Smallfoot; it has great music, good humor, and some really powerful messages about what it means to belong, and how we shouldn't be afraid of people who look different than us.
Posted by Michael Offutt, Phantom Reader at 12:31 AM

Email ThisBlogThis!Share to TwitterShare to FacebookShare to Pinterest
Labels: Smallfoot, Smallfoot delivers a few great messages to its audience in its cleverly written screenplay