I recently read the following three books: Spellsinger, The Hour at the Gate, and The Day of the Dissonance. I'd never read anything from Alan Dean Foster except for a single Star Wars tale called Splinter of the Mind's Eye. So when I picked up this omnibus called Season of the Spellsong (which contained the above three novels), I had no idea what to expect. Furthermore, I think I did it because the cover art on the omnibus is rather ridiculous. I'll include it below and to the right for reference. 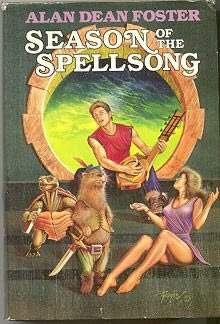 The characters you see here are Jonathan Thomas Merriweather, playing his duar (instrument) that gives him his magic, Clothahump the turtle (who is the most powerful sorcerer in the land), Mudge the Otter (who speaks with a thick English accent), and Flo Quintana, who's a cheerleader at UCLA. It actually sounds ridiculous to just be typing all that, but yeah...those are the main characters. Ones that you don't see (but I'd love to see them realized in art form) are Pog the bat, who serves as an assistant to the turtle sorcerer, and a frog that's a boat captain, and a tiger named Roseroar (that I imagine speaks in the same voice as Captain Phasma from The Last Jedi). Oh and how could I forget the gay unicorn. Yup, in these novels from the 1980's there was a gay unicorn folks. We learned he was gay because some brigands used a virgin lass to lure him out of hiding, but it had no effect on him because he liked boys and not girls. Wrong sex, ya know?

Despite the size of this omnibus, which clocked in at 730 pages, I breezed through it like it was nothing. Alan Dean Foster's writing style and mastery of dialects is hilarity in action. Additionally, the whole thing was chock full of things I'd never seen in books before. There was a double river, one on top of another, that you could sail on. You just had to sink your boat to the lower river (where there was air) and you could pass right along with a river right on top of you. And there was a desert that acted like a huge hourglass that someone turned over twice a year. The only safe place was a city named Redrock at the very center of the desert, surrounded by a huge moat that was so deep you couldn't see the bottom. Twice a year, all the sand in the desert rose as a wave and headed toward that city, only to fall into the moat and reemerge from a crystal tower with a huge hole in it spewing into the sky like a whale's blowhole. Magic kept it from falling back into the city. Instead the sand just kind of reset itself over the desert. It was kind of fascinating stuff.

But the reason why I think these books are more relevant than ever is because of how much foresight Mr. Foster had in acceptance. There are dozens of talking races in this book all sharing one planet from a turtle, to an otter, and yes...even a river dragon that has memorized all the writings of Karl Marx and wants to lead the revolution of the downtrodden masses (in this case mice and rats) to overthrow the oligarchs. It's strange "portal fiction" pulling characters from 1980's America into this kind of crazy setting, echoing Disney's Zootopia moreso than just about anything else. In fact, I'm convinced that Alan Dean Foster could have easily written Zootopia if he'd wanted to.

And the other weird thing about these books is that they aren't written for children. These are adult characters doing adult things. The otter, Mudge, is a lech who'd get slapped for harassment were he employed in an actual workplace. Clothahump is a grumpy old fart who wields serious and dangerous magic. There's blood and war and some terrible things that happen to these characters, only they're rabbits instead of humans. Weird third-person omniscient head-hopping aside (hey it was a thing in these 80's books), this is a world that says, "Diversity is a magical thing if you just start treating people humanely and can ignore the way they look on the outside." But then it backtracks on that message too.

It addresses the desire to be someone else in a remarkable way by giving us a character who is a bat that's in love with a beautiful falcon. But the falcon won't give him the time of day because he's an ugly bat. So he gets transformed by magic into a phoenix and flies off with the falcon, and he's happy. There's no, "be happy with who you are." The message here is, "Who you are may not be sufficient so if you can, get plastic surgery to change it and who knows...maybe your dreams will come true." I've never read a message like that from a book. It totally throws out the mantra of "you are enough" and embraces "change if you can because what you are is ugly." There's a brutal honesty to it that, I gotta say, I kind of liked. It may not be a popular message, but I think it would ring true with a lot of people's personal experience.

And of course, the gay unicorn just had me laughing out loud. I'm going to read more Alan Dean Foster. He's got a weird and creative mind. I just kinda have to wonder though if he's a "furry." I've heard of "furry conventions." It strikes me as something I should look up at some point.
Posted by Michael Offutt, Phantom Reader at 12:13 AM

Email ThisBlogThis!Share to TwitterShare to FacebookShare to Pinterest
Labels: Alan Dean Foster, Day of the Dissonance, Hour at the Gate, Season of the Spellsong, Spellsinger, The surprising works of Alan Dean Foster are remarkably relevant today