Here's four points I want to make about Jurassic Park that make it lightning in a 25-year-old bottle. 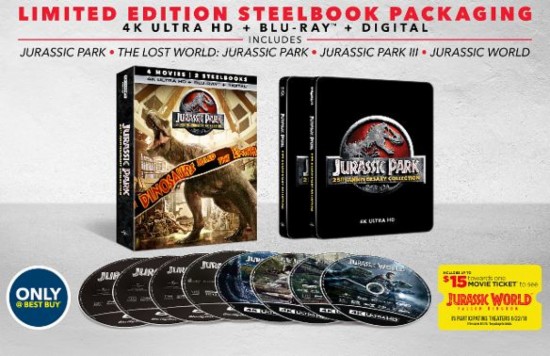 I bought the 25th anniversary of Jurassic Park on 4K ultra HD off Amazon a few weeks ago, and I plan on watching it tonight with two teens who have never seen any of the Jurassic Park movies. It should be a lot of fun, as I've been educating them on some of the best offerings from the eighties and the nineties in a weekly "Wednesday" movie format. We eat popcorn, and I provide some insight into the film that we're about to watch to give it a little "educational" edge. The movie itself was a great deal. I got all copies of the Jurassic Park movies in 4K (including Jurassic World), blu-ray copies of the same movies (that I can give out as gifts) and an awesome carrying case that showcases facts about each movie, all for $40.00 (I think this was a super sweet deal).

In thinking about Jurassic Park and what I want to say about it, I've isolated four main points that I want to emphasize when it comes to this movie:

1) Jurassic Park was lightning in a bottle. For shark movies, there is really only one good story and that's Jaws. I think time has pretty much proven this to be correct. Everything else just isn't as good. The same goes for dinosaurs. That one good story was penned by Michael Crichton who was a genius and foresaw how genetic engineering could possibly bring back prehistoric/extinct animals if you could just get the D.N.A. blueprint from something. It's just enough of a stretch to make this tale believable. There's no old world sorcery or time travel element involved. The story just asks you to stretch the science we already know today a little further and bam...you are in Wonderland.

2) Michael Crichton obviously had a thing for theme parks run amok. HBO is currently running the critically acclaimed Westworld, based on a story by Crichton. In a similar vein, Jurassic Park is the same kind of show, taking a theme park and making it all break down in the most catastrophic and dramatic fashion possible.

3) Jurassic Park has many themes to it. One is that humans and greed are at the root of failure when it comes to realizing big ideas. A second (and sometimes overlooked) message of the story is parenting and acknowledging that parents oftentimes don't make the best decisions when it comes to children. They can also get completely overwhelmed by natural circumstances causing events to spiral out of control even in a world full of the modern luxuries and conveniences that we all take for granted. In the end, the character of Dr. Grant is every adult out there who finds himself suddenly caring for smaller humans and just winging it to try and keep them safe.

4) John Williams's musical score is perhaps the best one that he's ever done, and it's perfect to the tiniest degree in adding emotional punch to scenes in the movie. If ever there was a musical score that is a true masterpiece, it is Jurassic Park.
Posted by Michael Offutt, Phantom Reader at 12:27 AM

Email ThisBlogThis!Share to TwitterShare to FacebookShare to Pinterest
Labels: Here's four points I want to make about Jurassic Park that make it lightning in a 25 year old bottle, Jurassic Park