Pixar knows how to handle family dynamics and emotions which is why the Incredibles is better than any Fantastic Four movie. 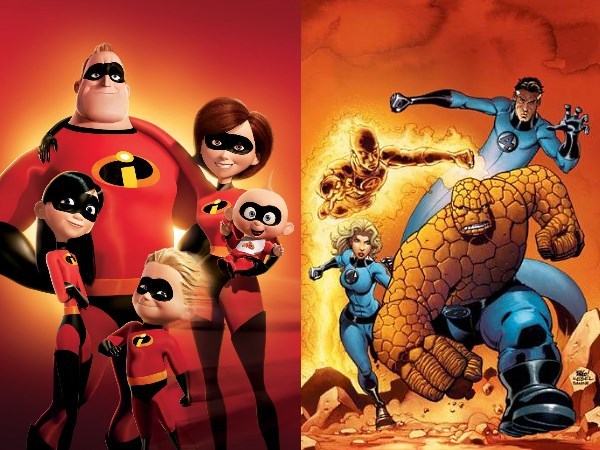 The Incredibles 2 is coming out this week, and I already have my tickets. If you're a fan of the Fantastic Four comic books though, it's hard to see how well Pixar does with essentially the same characters compared to how poorly conceived and managed the Fantastic Four movies have always been.

In the Incredibles you have:

1) Mr. Incredible. He has super strength and above average resilience to the elements.
2) Mrs. Incredible. She's able to stretch her body to unknown lengths.
3) Violet. She's able to go invisible and create force fields.
4) Dash. He's able to run at super sonic speeds.
5) Jak Jak. This baby has the ability to shapeshift, plus a lot of other things thrown into the mix that we haven't even explored yet.

In the Fantastic Four you have:

1) Mr. Fantastic. Like Elastigirl above, he's able to stretch his body to unknown lengths.
2) Invisible Woman. Like Violet, she has invisibility and the power to create force fields. She also has telekinesis.
3) Human Torch. He's able to turn his body into living fire and he can fly and shoot all kinds of projectiles out of his hands.
4) Thing. He has a body made of rock and he has super strength.

So, as you can see, it's a pretty close matchup between the two franchises. Of course, Fantastic Four did come first, but that really isn't any excuse as to why the Incredibles is so much better at its story on the screen than the Fantastic Four has been. If you've even bothered to watch any of the Fantastic Four incarnations, I think you'd agree with me that they are terrible...basically unwatchable...piles of steaming night soil.

Anyway, why do you suppose that is? Rather, what does the Incredibles do that makes it so much better?

Pixar is brilliant at breathing life into characters. They know how arguments, love, caring, and all the feels can really spin into a strong story. They focus on the characters and try to build layer upon layer of emotional impact so that you end up feeling it in your heart. The Fantastic Four films focused too much on story and powers and not enough on the relationships between the individual characters on the screen. When I watch the Fantastic Four movies, I see that they have no heart to them.

Fantastic Four as an intellectual property is also kind of ridiculous. Stretching (outside of animation) just never looks good (it's cheesy) and Doctor Doom is a strangely wild creation of a villain, being simultaneously a despot, an evil sorcerer, and a genius.

But all these criticisms aside, I think what does it for me with Incredibles vs the Fantastic Four is the family dynamic. If it isn't spot on then it's not going to be entertaining to watch. And in this arena, Pixar wins hands down.
Posted by Michael Offutt, Phantom Reader at 12:45 AM

Email ThisBlogThis!Share to TwitterShare to FacebookShare to Pinterest
Labels: Fantastic Four, Pixar knows how to handle family dynamics and emotions which is why the Incredibles is better than any Fantastic Four movie, The Incredibles