Ready Player One was a fantastic movie. I saw it with my best friend, Brad Habegger, and he liked it too. But if you've read the book, there are quite a few differences, and likewise there are quite a few things that are similar with the original story (as told by Ernest Cline). From this point forward, I want to warn you that there may be a few spoilers in this post. But (for the most part), I'm going to talk about how Ready Player One got created rather than concentrate on the individual events that transpire in the movie. So proceed with caution if you're scared of getting even a single spoiler in my weird, roundabout way of giving a review for this thing.

Much of what's enjoyable for me when thinking about a movie is examining the recipe of all the things that go into making the thing in the first place. It's just how I roll. And Ready Player One took a total of eight years for it to get made, which is kind of crazy if you think about it. In a previous blog post, I pointed out how it took Steven Spielberg's creative team some three years JUST to get the licensing for the things they show in the film. This aside, the rest of the time was spent figuring out just how to realize all of the concepts that Ernest Cline wrote about. Making it a tad more difficult was the fact that Ready Player One wasn't even finished yet when it was purchased by the movie studio. I think that's an odd occurrence in and of itself. How lucky can you be when your book isn't even finished, and it's been optioned for a major motion picture by Warner Brothers? I suppose it'd be kind of like winning the lottery, and I honestly can't even imagine that kind of success. However, it does explain why Ready Player One (when you read it) feels like it was written to be a movie more so than it does existing in its other accessible format (as a novel on a shelf).

The original (first) script was written by Ernest Cline. As the story goes, he left out parts in the book that he thought would be too expensive to realize as a movie (the part in the dance club was one of these scenes that got cut). And then in swept Steven Spielberg to the meeting with Ernest Cline, having read the script and the book. The legendary director then asked for the parts to be put back into the script. When Ernest Cline said that he cut them because he thought they would be too difficult, Spielberg replied, "I'm Steven Spielberg. I can do all that stuff. Trust me."

In the end, other script writers were hired to help Cline adapt his book to a workable movie format, but Cline also said that working with Spielberg was a blessing. That being said, the author is really proud of how the movie turned out, and that's good enough for me. With all the differences, and considering the legal nightmare of obtaining all the intellectual property present in the Oasis, the film still tells a resoundingly good story with a moral to it: don't get so caught up in fictional worlds that you let real life slip you by.

To finish, I wanted to point out four things I spotted in my viewing of Ready Player One that are related to my childhood passion of Dungeons and Dragons in the film. Hopefully, if you played D&D at all, you'll appreciate these. So here they are:

1) Look for the Tomb of Horrors illustration from Dungeons and Dragons on the door of the vehicle that "Aech" drives. Here's what it looks like: 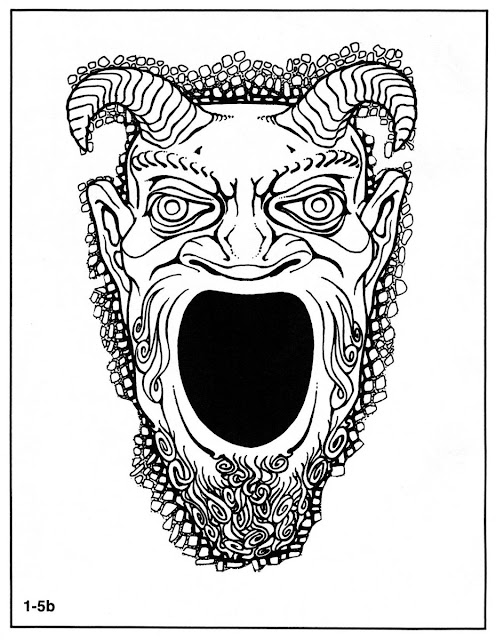 2) Look for a picture called "The Great Red Dragon" by the late Keith Parkinson on the Door of Haliday's bedroom near the end of the movie (after Parzival has won the contest and is about to receive the ultimate easter egg). Here's what it looks like: 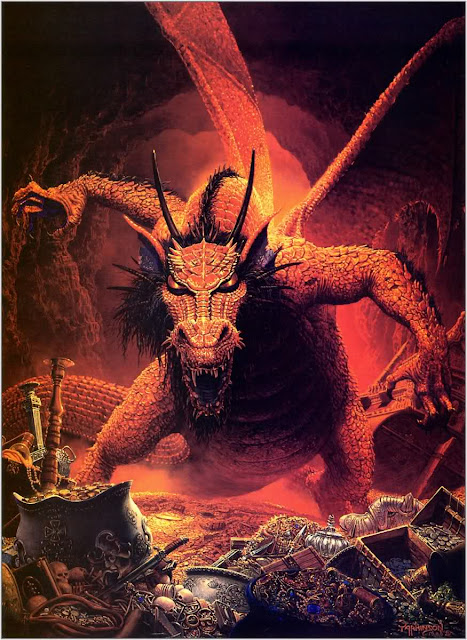 3) There's a mention of "Gold Mines of Gygax" in the film, which is an homage to Gary Gygax, creator of Dungeons & Dragons.

4) The Orb of Osuvox is obviously a 20-sided dice modeled after the iconic die used to roll in Dungeons & Dragons.
Posted by Michael Offutt, Phantom Reader at 12:18 AM