I really hope that the new Robbie the Robot in the Netflix Lost in Space draws some kind of connection to the Krell of Forbidden Planet. 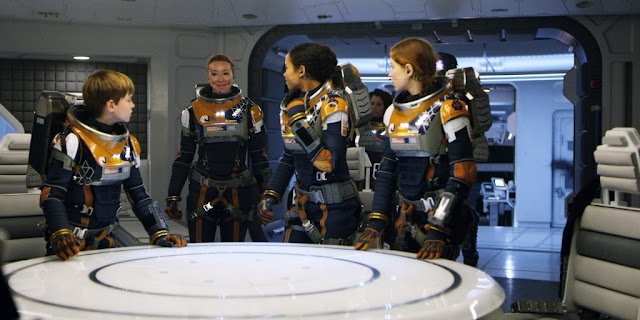 I'm only four episodes into the new Lost in Space that premiered on Netflix this weekend, and I've really been enjoying it. Simply put, the show looks stunning on my television, and all of the acting is good, even that done from the twelve-year-old kid that's playing Will Robinson. However, the most eye-catching thing in the episodes that I've watched is the mysterious robot.

Being a science-fiction nerd, I know that the original "Robbie the Robot" got its introduction in a fifties movie (that I love) called Forbidden Planet. It was a Shakespearean-inspired retelling of The Tempest, Prospero the sorcerer, being recast as Doctor Morbius and Prospero's daughter Miranda as "Tara," who consequently is the only woman in the film. This kind of story (with an all white, all male cast) could not be told today without significant changes. But the most fascinating thing about Forbidden Planet was the research that Doctor Morbius had done, a small part of which allowed him to cobble together "Robbie the Robot." As an aside, Doctor Morbius does reveal in Forbidden Planet that building something like "Robbie the Robot" could have been expected of a child among the Krell...beneath the notice of greater minds.

In the movie Forbidden Planet, Robbie the Robot could do just about anything. In one scene he delivers 200 tons of lead shielding that he created the night before and sets it down with only one arm. He takes a request from a cook to synthesize Kentucky bourbon and creates something like fifty gallons of it (again with only a sample and in about a 24-hour period). How does this differ from the robot we're seeing in the Netflix series? Not by much, but with one notable exception (spoiler alert). Robbie uses a 3D printer to get a gun to give to Will Robinson for protection. I sighed at this, because the Robbie the Robot from Forbidden Planet would have just made one (could have made an entire arsenal on request within 24-hours).

Now I know that Netflix is under no obligation to go back to the roots of the robot. But I have to say, why not? The story of the Krell was incredibly fascinating and even if a smidgen of it makes its way into backstory for the setting of Lost in Space, it would be fun...maybe even amazing. They were a civilization that reached unimaginable heights of power. They literally solved the problem of power and created infinite energy that their society could use to build things. At the very pinnacle of their civilization, they unleashed a machine that would allow every single Krell on the planet to make real anything that they could possibly imagine. It was this that destroyed them, because basic emotions buried within the Krell (like anger and jealousy) caused monsters to spring forth that wiped them all out within a single night. The fifties show called them "monsters from the id." Left behind was a civilization of machines that kept running for a hundred million years without anyone to tend to them, until Doctor Morbius found their relics beneath the surface of an unexplored planet and started studying all that he could find (everything that was above ground had long eroded back into the planet surface).

So yeah, here's my hope that the new "Robbie the Robot" in the Netflix Lost in Space draws some kind of connection to the Krell of Forbidden Planet. I think it would be all the richer for doing so.
Posted by Michael Offutt, Phantom Reader at 12:42 AM