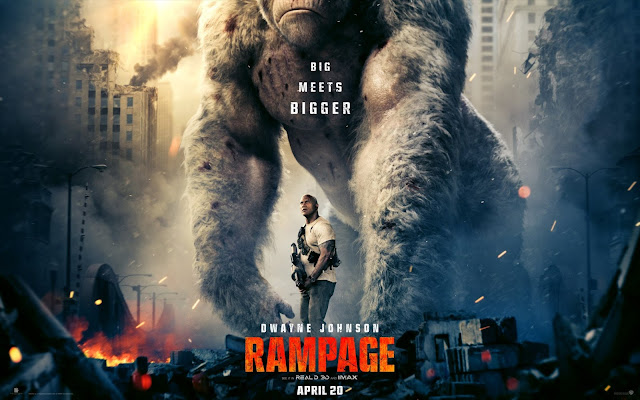 I saw Rampage on Tuesday night. It was a fun flick, but it made me think of kaiju and why I want to see films like Rampage, Pacific Rim, and the upcoming The Meg.

When it comes to Godzilla and other kaiju of the Showa era of television, the Japanese were putting a face or symbol to an overall fear that they had of nuclear power. This has been talked about and discussed for years, and Godzilla is (himself) an embodiment of that fear run amok. But the extenuating longevity of such creatures in cinema makes me believe that there's something else that's going on here. Another theory is that giant monsters and robots are the reverse of the fascination we all have with disaster porn...that we are celebrating the creator of the destruction as opposed to the aftermath of the destruction. Eh, maybe that's it, and maybe that's not it.

My theory is that Americans like small things, and this is especially prevalent among young people. In our society, fat people (for example) are reviled and have been for decades. And look I'm just pointing out how I see things, and I'm not trying to shame anyone's body style. It's just the truth as I see it (as uncomfortable as the truth may be). I'm just asking that you listen to me for a bit before the outrage sets in on what I'm trying to say. If you allow yourself this time, you might start to see my point. Anyway, I'll continue.

Call a person "fat," "large", "roamy" or whatever adjective you want, and you'll see an obsession with size. It's a "I'm glad I don't look like that" kind of thing. There are people who shame men who take up too much space in a subway car (they call it "man-spreading"). Not enough of an example? Well, I've noticed young people don't like larger phones. "That looks way too bulky!" I've noticed a lot of teenage girls want "small cute cars" and "small this" and "small that." Most want thin (read as small) boyfriends. So from my observations, people idolize small and hate "big." And it doesn't stop with flesh. There's always a drive to make the latest tech device lighter, thinner, smaller. And plastic surgeons make their megabucks by promising to shave a millimeter here and there. Size, size, size...it's what's important and what people seem to value. Many hipsters like to go to fancy restaurants where the portions are small but beautiful (that's another example). I have acquaintances who (in the privacy of a home where they can speak and not be judged) say out loud to me, "I'm not attracted to fatties." It's just the way some people are, but you can bet they'd never say that on social media. Nope, these same people post body positive messages on their social media...a "do as I say not as I do" thing. If you didn't realize it quite yet, I'm sorry, but people are terrible. *Bubble Burst*

Anyway, it's my opinion that whether or not you express it, most Americans these days have at least an unconscious bias for liking small things (even if we ourselves are large). And by converse, it's not much of a stretch that this bias for liking small things also wants us to fool ourselves into thinking that we too are small (even if this isn't anything even remotely close to the truth). Kaiju, huge monsters, and giant robots destroying cities does this in a fantastic way. These huge monsters make us all feel small and powerless and helpless, even if we are six-foot four and could benchpress a Mack truck. Seeing these monsters reminds us of happier times when we were children and small and could not comprehend the world in the jaded way that we do now. And it's this powerful feeling...it's this ability to make us feel small in a good way...that is why we like huge monsters. That's my theory anyway. Who knows, maybe seeing things that are larger than you can even improve your self-esteem in small bursts because you know that other people are staring at the large thing causing all the destruction. "At least I'm not the monster" the unconscious thought may go. And for this simple reason, big monsters, giant robots, and kaiju may have an enduring legacy that goes on and on forever in the cinema that we all enjoy.
Posted by Michael Offutt, Phantom Reader at 7:05 AM

Email ThisBlogThis!Share to TwitterShare to FacebookShare to Pinterest
Labels: fat shaming, Kaiju, Rampage, Why do we like big monsters