Here are five things that I absolutely loved about the Star Trek Discovery premiere. 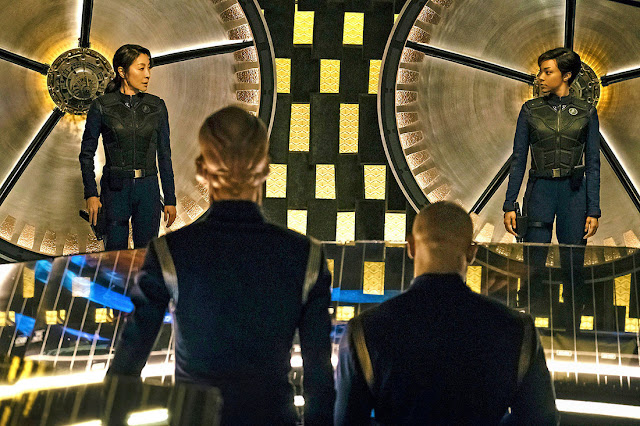 My friend Kevin Long asked me on Wednesday (via a comment) how I liked Star Trek: Discovery. I suppose I thought the implication that I liked it a lot was in there somewhere, as I went to a lot of trouble to get it to show on my LG television. But since my viewing, I've thought about exactly what I liked about it, and I'm going to tell you. Oh and Kevin, if you're reading this, you should send me an email because I lost your contact info in my last move. WARNING: There are spoilers for the first two episodes in this post.

1) Powerful female characters and strong diversity. The captain was Chinese, the first officer a black woman, and both roles predictably dominated over everything else. I liked that these Starfleet officers operated (essentially) without any reference to their sex whatsoever. There was no hint of fear of the Klingons, they did not get distressed or histrionic, there was no "standing down" unless it was done by threat of being shot, and the threats on their existence were taken very seriously and intelligently. The two women in the pilot (at the center of everything) are Captain Philippa Georgiou (played by Michelle Yeoh) and Commander Michael Burnham (played by Sonequa Martin-Green).

2) It's definitely Trek. I think the feel of it lies as a mix between Deep Space Nine and Voyager with punched up graphics, Aaron Sorkin-esque rapid fire dialogue, and combat/space battle front and center. It feels darker, grittier, and very serious. The best of Trek was always in the space battles and wars. The makers of this show know this and they threw it in the pilot episode. Fantastic.

3) Michelle Yeoh blew my socks off. I loved hearing her accent, and it felt refreshing for some reason. Maybe it's the fact that in the real world, we are almost on the verge of a nuclear war with North Korea and that our only hope to reign them in peacefully seems to be through the actions that China may or may not take. Michelle Yeoh spoke her lines with every fiber of her being. It was great hearing such conviction and it is disappointing that she died in episode two.

4) The show is taking big risks. The first two episodes introduced us to a captain that was at the center of tremendous conflict (that was at times an edge of your seat thriller). Then it killed off that captain in a deadly battle that proved how big the stakes were. Multiple ships, including the Shenzou were essentially destroyed. A federation admiral was killed. A war with the Klingon empire was started. And the other main character, Michael Burnham, was sent to prison on charges of treason, conspiracy, and mutiny (essentially for the rest of her natural life). Where the hell do we go from here? If we continue with Michael's story, we will be rooting for a criminal.

5) The finishing touches are incredible. There's an alien on the bridge of the Shenzou that has amazingly detailed skin, to the point that it looks almost iridescent. Whoever is doing the makeup is a maestro at their job. The bridge looks super polished and awe-inspiring. The computer generated graphics are (at times) rather mind-blowing. And the vistas of alien worlds and the shots of the universe out through the main projector screen are stunning. In practically every screen there's an opportunity to say, "wow."

So there you have it. If you watched the show, please share any thoughts you may have in the comments below.
Posted by Michael Offutt, Phantom Reader at 12:02 AM