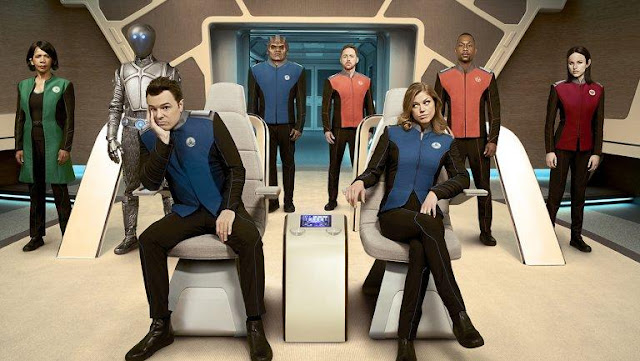 Dignity is probably over-rated anyway. If you disagree, you probably won't like The Orville. I, however, did end up liking it quite a bit. Living modern seems to lack all kinds of dignities these days. Even minus a president who will say anything that comes to his mind, we have a culture where it is no longer considered "crossing a line" to just ask people how much they make or spent on something (even if you don't know them), to ask them if they masturbate, or to air entire arguments between couples on Facebook (or for that matter broadcasting it on Facebook Live) So The Orville seems particularly timely because it does all of those things, refusing to back away from its crew needing to "take a piss" or from talking about a messy divorce that's broadcast over the loud speakers. Truth be told...I don't particularly like the fact that nothing is taboo in our culture anymore. For one, I kind of liked it back when people had manners and said "thank you" or used the word "please." But it is what it is, right? Maybe all the grossness of life being aired like it is on reality television is the remedy for a culture that (otherwise) might tend to glamorize life. It's the "anti-glamorization" movement so to speak. And I think it found a good representative in Seth McFarlane.

Seth is an interesting guy. A creative genius he no doubt is, but he also seems to have some incredible clout with Fox. He was the one that got Neil deGrasse Tyson's reboot miniseries of Cosmos to get made, and it doesn't surprise me that Fox clearly threw a huge budget behind The Orville (as well as giving it a coveted Sunday night air time). The powers that be seem to love Seth McFarlane. The Orville looks very slick and polished too. It has a big budget feel to it, putting to shame any Star Trek series's special effects that I've seen to date. We'll see how this fall's Star Trek: Discovery measures up. However, I have a feeling though that they'll be fairly comparable as far as visual effects go. I just hope Star Trek: Discovery is more nuanced, takes itself seriously, and has a slower pace. I miss a slower pace guys...everything these days seems to be made for people with attention deficit disorder. With The Orville, I felt a little breathless as every scene seemed to be jam-packed with action.

As far as an homage to Star Trek goes, I liked it a lot. But The Orville does go where Star Trek never did: it dared to poke fun at it's own crazy ideas. We get introduced to an invention which has the ability to create a bubble of time wherein everything else inside that bubble gets aged a hundred years. As a scientist points out...the implications are huge in that you could grow crops in a single night for a city of starving people or other similar uses. But they use it to age a banana into dust and to grow a redwood tree mixed with tardigrade DNA (so that it can survive in space without food or water) to destroy a spaceship. It works but again...without much dignity. It's funny of course. I just wonder how long they can keep it up before the slapstick becomes kind of tedious. Can you imagine the reception audiences would have given forth if the "Genesis project" had been treated with such abandon?

And this makes me beg a question to the public at large: is a theme of space any fun over a long haul when it is done tongue in cheek? Humor kills drama, and drama is the bread and butter of any traditional one hour television show. Would Law and Order have any of its impact if all the scripts were performed in such a way as to be slapstick and without dignity? I'm not sure that it would. So it'll be interesting to see how my feelings toward The Orville develop over the course of the season. Will they deepen or will I be glad to see it go?

Anyway, what did you guys think of it (if you watched it)? Are you going to continue with the show on Sunday night? Or did it just rub you the wrong way? I'm looking forward to reading your comments.
Posted by Michael Offutt, Phantom Reader at 12:17 AM

Email ThisBlogThis!Share to TwitterShare to FacebookShare to Pinterest
Labels: The Orville, The Orville is basically a polished version of Star Trek minus any dignity