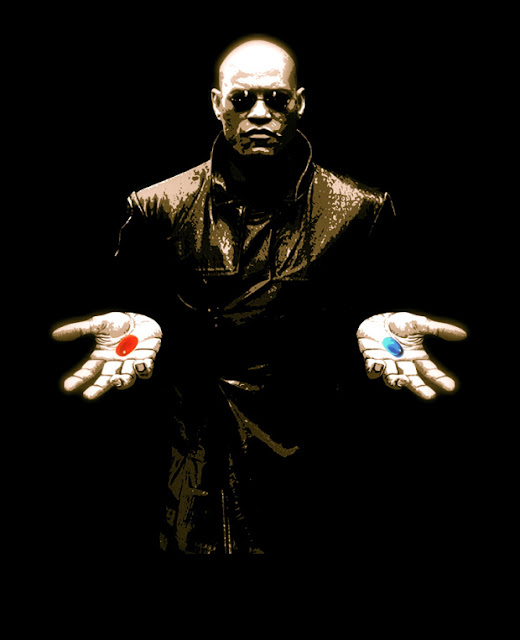 I think the true "Wonderland" is the internet. It's a strange place because the psychology of people is strange, and when you get so many ideas being shared, you are bound to run into anything that you can imagine and a few that you never could. One of the things that I've discovered/run into on the internet is a whole community of "Red Pillers." These are an enormous group of men who essentially co-opted the scene from the original Matrix wherein Morpheus asked Neo if he wanted to take the Red Pill or the Blue Pill. Men who are "Red Pill" are referred to by this community as being ideal men, with strong alpha masculine traits. Divorce is referred to as "wealth extraction," and liberals (because of a strong connection with modern feminism) are truly hated/loathed. Contrary to what many may think of me, I find their discussions among each other to be fascinating. Lurking under the surface of every man in this online community are extremely embittered feelings that have no outlet. To say that these men will never trust a woman again might even be an understatement. Rather, to say that these men actually have contempt is what's really going on, and the real struggle with these people seems to all center around one basic idea: how does a modern man feel masculine, powerful, and respected (sexually--it's always about sex) in settings (whether they be at bars, parties, raves, or at home having dinner) that are ultimately dominated in sexual tension. These men even have their own vocabulary consisting of words like "beta cuck." All of this rests (of course) on an underlying principle that men need to embrace in order to get around to the idea that men need fixing to begin with, and it's this: young attractive women have all the power in relationships and men are dogs begging for scraps.

It's a fascinating premise, and I have no idea if it's true or not. For some people it probably is, for others it probably isn't. Sweeping generalizations never seem to work out just right, but I've often discovered that buried within a generalization might be a shred or two of some truth. And this again may depend entirely on belief. In other words, what a person believes may actually make some thing true, which is not to say that it is "factual." I'm saying this now because "facts" and "truth" are oftentimes confused and used synonymously, but they are not the same thing. But I digress. No, what all this "red pill" stuff got me thinking about was the genre of "fantasy fiction," which is more or less dominated by "Game of Thrones" right now. But there are other examples aplenty, and I (for one) love both to write and to read fantasy fiction. It wasn't until I started to read all this "red pill" stuff online though that I truly started seeing how a lot of fantasy fiction written by men is filled with "red pill" qualities. So (for that matter) are video games like World of Warcraft and other such things.

In these fantasy worlds, which oftentimes are based in some kind of world that is similar (or borrows strongly from) the medieval periods of Europe and Asia, you can read exceptional tales of fictional lives that are literally filled to the brim with something lacking in a lot of lives: meaning and purpose. What a concept, right? In many of these stories, women (for the most part) need to be saved a lot, whether it is from rapes from monsters and other such evil creatures, or from tyrants or other such bad agencies. I suppose that a lot of fantasy (in fact) rests on the trope of good vs. evil, but even if it doesn't (such as that presented by George R.R. Martin), it does need to have constant conflict between groups (think the warring kingdoms of Westeros) because only in conflict can men really prove how masculine and mighty they are. I started to think that this may be a reason why games like World of Warcraft and the fantasy genre (typically awash with nerds) are so popular with men as are gaming and comic book conventions (which also have a greater percentage of men than they do women). In other words, I started to think that because our country is so safe (let's face it peeps...in comparison to other countries the U.S. as a whole is a pretty darn uneventful place to live). To clarify, I'm not saying that the U.S. doesn't have its problems with crime and punishment, inequality, justice, etc. What I'm saying is that we are not war-torn, nor do we have a widespread problem regarding access to food and water and other such necessities. Americans for the most part, have the ability to enjoy a concept called "free time," which means that (as a society) some of us even experience boredom on a regular basis. But a side-effect of all of this free time is that a lot of young people no longer have purpose and meaning.

Enter in the epic fantasy, whether it be presented as a role-playing game, a video game, a fictional book of a thousand pages written by George R.R. Martin, or some virtual reality thing that I have never yet seen, and I suddenly realize what's going on here. It's a "red pill" dreamland. In these entertainments, men feel powerful when (I'm beginning to suspect) they don't feel powerful in real life anymore. In other worlds, in our society there's no one that really needs to be saved anymore in some "dramatic" way. There are no dragons to slay. The modern way of "saving" someone is to get a job and turn over a paycheck, which has far less appeal than raiding the horde of an ogre.

Anyway, all of this collapsed into an idea that popped into my head about why boys don't read fiction anymore (for the most part). Sure there are still some of us out here that do, but it got me to thinking that if publishers want to have boys read fiction then they're going to need to make stories wherein (when a boy reads it) he feels powerful. It sounds pathetic, right? Why do men need to feel powerful? But it is something I'd like to open for debate to see if anyone else has noticed this. In any event, we live in interesting times.
Posted by Michael Offutt, Phantom Reader at 12:10 AM