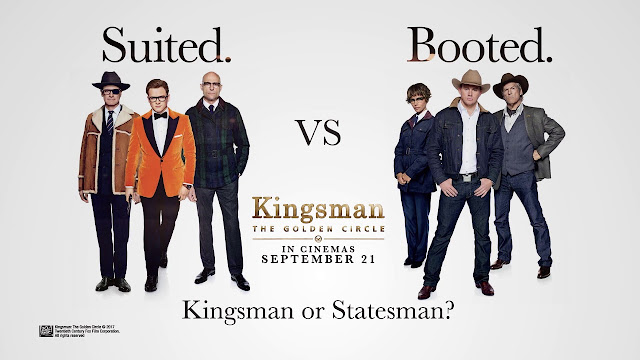 With Kingsman: The Golden Circle ready to take on It at the box office this weekend, I thought it would be nice to do a post for all you peeps out there that don't know much about the "behind the curtains" stuff of this franchise. Namely, there's four things that I know:

1) Colin Firth wasn't supposed to be in the sequel. The popularity of the character virtually demanded it be done though, and I guess I'll know soon enough how it happens.

2) It's loosely based on "The Secret Service" comic book series by Mark Millar and Dave Gibbons. I've never read the comic book myself (I bet Pat Dilloway has), but I do like that it's "over-the-top" like a comic book movie. I think a lot of the spy genre stuff that's come out these days is too grounded in reality. I want to see fantasy mixed in with these super spies. Like fantastic crazy stuff...unbelievable stuff. Not a string of gun-kata martial arts maneuvers that goes on for about an hour and a half (with some dialogue dribbled here and there in a half-assed attempt at cobbling together a story).

3) Colin Firth did 80% of his own stunts. I'm really surprised at this because a lot of the stuff that his character "Harry" does is really impressive. Maybe not Tom Cruise impressive, but Tom Cruise is kinda crazy in my opinion.

4) In real life, Taron Egerton (who plays Eggsy Unwin) is scared of dogs. I actually share this phobia to some extent. I was attacked by a dog when I was eight years old. I see that dog oftentimes in my mind whenever I look at someone's pet. I feel like people don't realize how much of the "vicious animal" still remains inside their beloved family member. But it's there...always lurking.
Posted by Michael Offutt, Phantom Reader at 12:15 AM