The Game of Thrones animated series launches December 12 and it packs a lot of information even if the CGI is bad. 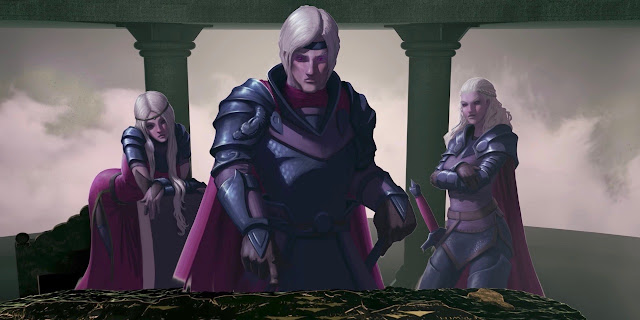 In the gulf that exists between now and whenever the final season of Game of Thrones arrives on HBO, we now have a storybook-style animated series called Game of Thrones Conquest & Rebellion. The first episode, which is about four minutes long, actually explains A LOT about Westeros that I never got from the books or from the television series. It's probably been explained by George R.R. Martin at some point in his encyclopedic books that he's put out, but I've only purchased those as gifts for other people and never for myself. It's one of the things I plan to change in the near future.

So, I watched the first episode. The animation is clunky but the narration is pretty great. It's narrated by actor Harry Lloyd whom (if you remember the first season of GoT) played Dany's brother Viserys who received a "golden crown" of death from Khal Drogo. For what it's worth, Harry Lloyd has excellent pronunciation, and I think I could listen to him for hours narrating word after word.

The whole mini-series is 45-minutes long and is available as a bonus gift for pre-ordering the Game of Thrones season 7 blu-ray. I think I'm going to just try and track the others down online and see if I can watch them.

You might be asking, what did I learn in this first four minutes that I already didn't know?

I learned a little more about the Doom that came to Valyria, and that everyone apparently could just fly around on dragons. I thought it was something that only the noble houses of Valyria could do. I also learned that the Targaryens somehow knew that the Doom was coming, and they fled ahead of it to the isle of Dragonstone. That was interesting. They brought with them the know-how to build the fortress and then Aegon and his two sisters surveyed the nation of Westeros from the sky in order to commission a gigantic map (you see it in Stanis's war room in Dragonstone). I also learned the names of the ancient great houses. I didn't know that the Starks were the oldest house. I suppose I could have put that together, but I never did. I just knew they were a powerful house and ruler of the largest kingdom of the seven (if not the most sparsely populated).

The episode is definitely worth a watch, and I've embedded it below for your convenience. Who knows? If it's popular enough maybe HBO will explore it in live action through another Game of Thrones-esque series in the same world.
Posted by Michael Offutt, Phantom Reader at 1:32 AM