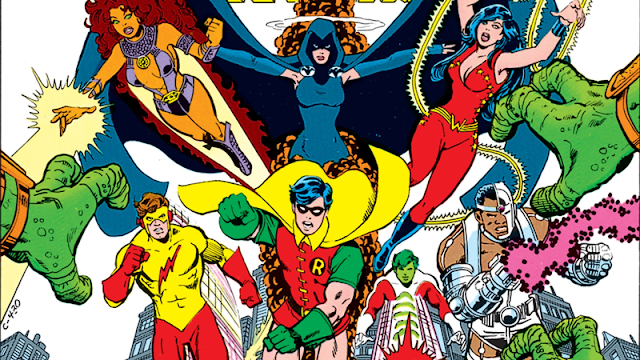 I know I've railed against everything having its own streaming service, and Warner Brothers starting their own just added one more rock to the pile. It would be tempting to say that there's nothing that Warner Brothers has right now that would make me want to subscribe to their streaming service. However, at some point in 2018 it has been announced that there is going to be a live-action Teen Titans. The only actress I know who has been cast is for the role of Starfire, and that goes to Anna Diop.

Starfire was never my favorite character. However, she was pretty dang cool with orange skin, an asymmetrical costume (a lot of artists get this wrong), and the ability to channel really powerful blasts of energy through her hands. We're talking Cyclops (from the X-Men) level energy blasts...enough to level buildings or destroy other such landmarks. She also could fly, and the way she was drawn, her jet stream just kind of emitted from her hair (it sounds silly now but it actually looked pretty cool in the comic book panels). For most of the comics that I read, she was in love with Dick Grayson, a.k.a., Nightwing, a.k.a. the first Robin from the dynamic duo of Batman and Robin. She was also known as Princess Koriander, which I thought was a really nice-sounding name.

My favorite character of the Teen Titans has always been Raven. The daughter of Trigon the Terrible, she is a follower of Azar's teachings (a goddess that was killed by Trigon). Azar was basically a comic-book version of Buddha and Raven was always trying to suppress the evil that was inside her (and was of course inexplicably linked to Trigon the Terrible). Raven had some very unique powers. For one, she had a soul self that was black that she could use to carry people and things in (like a massive handbag to an alternate dimension). Anything inside that soul self was subject to her full mind control powers. In one comic book, she even had Starfire inside waiting to surprise a villain that Raven captured (and they ended up fighting in the expanse of Raven's soul). Raven could also teleport around and she (of course?) had mind control similar to Jean Grey.

With that said and out of the way, yes I'm very excited. However, I want to rant about streaming services yet one more time. This is yet another streaming service that I will have to pay for to get a single TV show. I sincerely hope that everyone trying to manage their own streaming teat is going to have negative results, forcing them to realize that it's easier and more cost-efficient to just let Netflix or Hulu handle it. I don't love paying subscriptions to a billion different streaming services (and I think there are some people who are also in my same basket of thought about this).

If anything is to blame, it's because too many people bitched about cutting the cable and wanting everything a la carte. So yeah...that's what we're getting stuck with. I think some people will figure out that when you want everything that the a la carte menu offers, it ends up costing the same as just buying it whole, but without all the hassle. In the meantime, I guess I'll just plan on going broke trying to manage streaming services.
Posted by Michael Offutt, Phantom Reader at 6:57 AM

Email ThisBlogThis!Share to TwitterShare to FacebookShare to Pinterest
Labels: Teen Titans, Warner Brothers is making a streaming service and a live action Teen Titans series is on the slate