We need to talk about the Beyond the Wall episode of Game of Thrones.

So let's talk about that episode of Game of Thrones that aired last week. It was called "Beyond the Wall," but there's really only one thing that anyone is talking about: the mutha-f*ckin ice dragon. My friend Jake has been yammering about an ice dragon for over a year now. He even showed me a picture of the Night King sitting on top of an ice dragon that he claimed was from this season of the show. I told him it was a fake. Now I'm not so sure. Jake seemed to think that the ice dragon would come from inside the wall itself (which I thought was ludicrous), but now that I know it's Viseryon, I kinda wish it had come from inside the wall. I kind of liked Daenerys having three dragons. I suppose if one of them needed to die, going by way of the Night King was about as epic a death as you could hope for. And boy is the Night King ever powerful. He took out that adult dragon with one throw! As a side note, I love that Drogon dodged the second throw. He's obviously learned something from Qyburn's "scorpion." So what does an Ice Dragon mean exactly? Let's think about this.... 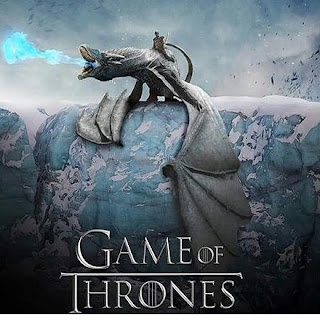 1) The Night King didn't turn Viseryon into a mindless undead. He turned him into one of them. That means that Viseryon is an intelligent undead (not mindless) and can make his own minions (just like any of the other White Walkers). It also means that he's invulnerable to anything except dragon glass and Valyrian steel.

2) The Night King can now fly around. This means that he can be everywhere just like Daenerys. One moment she's in the south where Dragonstone is and in the next moment, she's north of the wall saving Jon Snow (and the travel time between them appears to be essentially the time it takes liquid water to turn into ice at around the freezing temperature). So in the time it takes to make ice cubes in your freezer, the Night King could be anywhere he wants to be if only for that wall thing....

3) Prediction for this week: The wall is coming down. It has to. With only six episodes left in the final season, the wall as a plot device to separate the north from the south has run its purpose. Either that...or it will be rendered useless as Viseryon freezes the ocean with his breath to allow the army of the dead to walk around the damned thing. And for what it's worth, I've been frustrated that the army of the dead appears to be stopped by water. If the Night King brings the cold with him, why isn't he freezing the lakes and oceans so that his minions can walk on solid ground?

4) Second prediction for this week's season finale: Cersei dies. Her story is just about up methinks, and I don't think she's capable of allying herself with Daenerys. Jamie's going to need to take over (he's already the Kingslayer folks!), and I think he'll take Cersei out so that we can get down to business: the seven kingdoms uniting behind Daenerys and Jon Snow to fight the Night King.

5) Prediction for the final season: Viseryon will be killed by a dragon glass spear hurled from Qyburn's "scorpion" invention. That's why we were introduced to it in this season. It's an invention that will come in useful to unseat the Night King from his ice dragon mount. That is (at least) how I see it.

6) Question: Can Bran warg into an ice dragon White Walker? He's already established that he can enter the mind of a living human like Hodor. What's to stop him from taking control of Viseryon?

7) My fear: The wall will come down because Samwell makes it back to the north with Gillie and has brought the horn of winter with him. The Night King kills Samwell, takes the horn, and brings down the wall. That would be terrible. I really like Samwell Tarly. He's the only truly good person in the entire series (which unfortunately means he has a target on his back).

Anyway...I'm sure the season finale this Sunday will give us lots to speculate and talk about for sure. See you then.
Posted by Michael Offutt, Phantom Reader at 12:22 AM