The Dark Tower was an excellent popcorn flick. Just keep your expectations in check when you watch it. 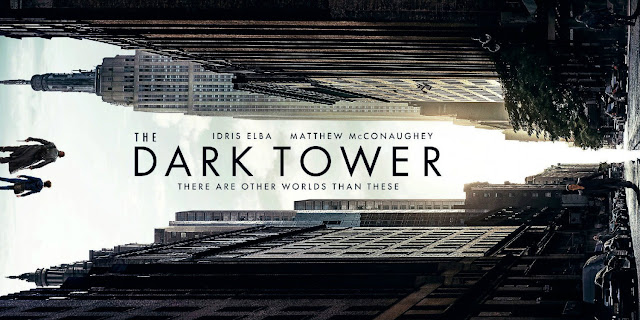 Last night, best friend Brad Habegger and myself decided to take a portal to mid-land in search of The Dark Tower. We both had low expectations. While at dinner, we talked over how Stephen King's movies (with a few rare exceptions) are pretty terrible. We also knew that The Dark Tower was getting panned by critics because (for the most part) people were expecting a direct adaptation of the books, and the director chose to tell the story from the point of view of Jake Chambers (which isn't how it is in the books). In adapting the story to film, they chose Jake because they felt he would be more relatable to an audience (having come from Earth). And inevitably, this decision ended up angering a bunch of die-hard fans. Both Brad and I were fans of the books (he's more of a die-hard one, and I merely think they are "good" reads), but we were both pleasantly surprised. Brad even said it was "excellent," which I definitely agree with. Maybe the key here was that we went in with such low expectations there was only one way to go (and that was up). Anyway, in my viewing of the movie, it may help you to appreciate it more if I point out some obvious "Easter Eggs" which end up serving as connections to Stephen King's other works:

1) There are the remains of Pennywise's Carnival in mid-world. Pennywise is the clown from IT, which has a movie adaptation coming out in September.

2) There is a framed photo of the "Overlook Hotel" that can be glimpsed inside Jake's psychiatrist's office. The Overlook Hotel was featured prominently in Stanley Kubrik's adaptation of The Shining, which Stephen King apparently hated. Honestly, I don't think Stephen King knows what he's talking about when it comes to film adaptations of his stories. He should just stick to writing.

3) Walter O'Dim/Walter Paddick/Randall Flagg (the man in black) has a group of psychic-powered kids working on his behalf. If you remember from The Shining, the kid, Danny, had "The Shine." This term is used explicitly in this manner to draw a connection to Stanley Kubrik's film.

4) There's a shot of Roland approaching a doorway covered with a poster that was also seen in The Shawshank Redemption, which is a good film by the way. Andy Dufresne used it to cover his escape route out of the prison.

5) There's a non-rabid Cujo in the film (a huge Saint Bernard) in a shot of a street in New York City.

6) There's a tiny model car that gets pushed around that's a dead ringer for the car in Christine.

And here's an additional fact that may help you to understand what's going on in the film if you choose to go and see it:

1) Who is the Crimson King? Though you never see him, the Crimson King is the guy for whom Walter works. He is the primary antagonist of King's eight-volume Dark Tower series and the archetypical embodiment of evil. His father was King Arthur, which essentially makes him a half uncle of Roland (the Gunslinger).

Overall, I'd advise you to lower your expectations for the film, and then it will be enjoyable for you. It's a fantasy that has a lot of fun with itself, borrowing heavily from all the books except for Wizard and Glass. In particular, The Wastelands plays prominently in this adaptation. So having enjoyed the film, I guess I'm now in "wait and see" mode, wondering just own on earth they are going to make a television series for it this fall (based on the movie). I mean, the movie did have a pretty complete story arc. I guess we'll all see when it happens.
Posted by Michael Offutt, Phantom Reader at 12:00 AM

Email ThisBlogThis!Share to TwitterShare to FacebookShare to Pinterest
Labels: The Dark Tower, The Dark Tower was an excellent popcorn flick