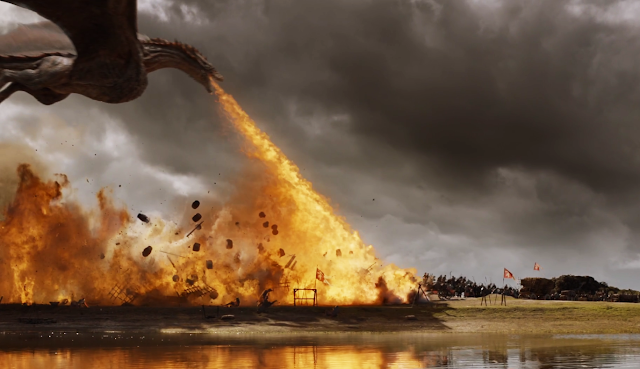 This last Sunday, the fourth episode of Game of Thrones' penultimate season aired called "The Spoils of War." As episodes go, it was a really good one with (spoiler alert) a battle that "set the Guinness Book of World Records" for most people set on fire at once. The last twenty minutes or so of the episode are thoroughly entertaining. But having watched those last twenty minutes over again, I have some questions (or maybe it would be better to say "observations" that are certainly open-ended and just waiting for some answers). So, I'll share them with you:

1) Why is the harpoon chucker that got Drogon in the shoulder called a "scorpion?" A scorpion has a poisoned tail as most people know. Was the ballista harpoon poisoned with one of Qyburn's deadly cocktails? He's already demonstrated quite the skill at manipulating and recreating poisons. I can't believe that the whole parade in front of the Dornish queen in the dungeons of King's Landing was simply to showboat how Cersei intended to kill one of the Sand snakes. So, are we about to see Drogon sicken and then die? I would hate that, but she does have two more dragons, and I suppose there's an irony to being wounded in the shoulder and then dying the same as his namesake, Khal Drogo.

2) Why did Arya end up with the Valyrian steel dagger? If she was going to kill more people, she hardly needs a Valyrian steel dagger to do that. Just about any dagger will do. The thing about Valyrian steel is that it's useful against White Walkers. Guys...I think this detail in the show is important. I think we've just seem some foreshadowing that Arya is going to kill the Night King and most likely take his place as the leader of the White Walkers--a "Night Queen" as it were. What do you think?

Anyway, those are my two questions/observations I had regarding the episode. I'll be interested to see what those of you (who watched it and care to respond) have to say.
Posted by Michael Offutt, Phantom Reader at 7:17 AM

Email ThisBlogThis!Share to TwitterShare to FacebookShare to Pinterest
Labels: Game of Thrones, Here are two burning questions I have about the Spoils of War episode of Game of Thrones