Dunkirk left me a little shell-shocked which is to say that it's an incredible film. 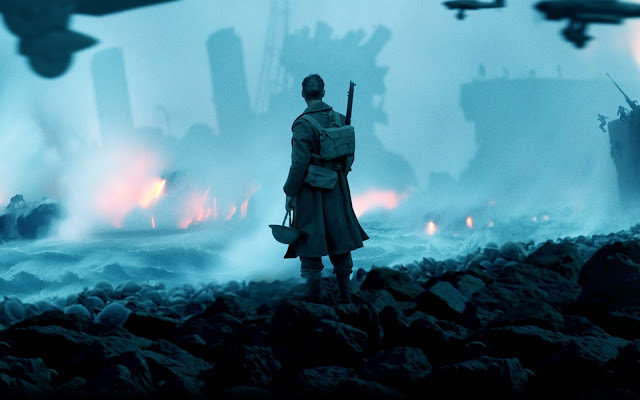 What to say about Dunkirk?

I really knew nothing about this part of history going into the movie. I decided to go and watch it in IMAX, because Christopher Nolan never half-asses anything and I knew that if this film was going to be released in IMAX, that it would be filmed for that particular screen in the highest definition film possible. That's just how Christopher Nolan does things. The effect was visceral, explosive, thrilling, and got me so emotionally invested in this film that I want to see it again.

There are no main characters in Dunkirk. I actually don't recall anything except for one boy's name who was in a lot of the scenes, but he certainly didn't have any more dialogue than anyone else. I know Kenneth Branagh was there looking amazing in his English navy uniform. Harry Styles was there too (playing a French soldier) along with Cilian Murphy and Tom Hardy (Christopher Nolan regulars). The really weird thing is, I felt like I was there too. About the only thing that breaks the notion of me being there is the presence of the music...a masterful soundtrack by composer Hans Zimmer. I realize that in real life, there's no soundtrack following me around adding tension or romance to scenes, but if that kind of thing did exist it wouldn't be a bad choice to go with Hans Zimmer. The man knows how to score a scene (even the really long ones).

I think Dunkirk is visual poetry. It's taking an event and presenting it with all of its chaos and inter-moving parts and characters, somehow throwing it all into a mixing bowl, and then laying it out again yet somehow it all works. Despite not knowing any of the characters backstory or their names, I found that I cared what happened to them. Nolan made me believe that the ships that kept getting sunk by the German planes were so real that I felt a little shell shock. As brave soldiers died by getting trapped in sinking hulls, I felt the same tension in my lungs (and the longing for a breath of air) if just for a moment. Somehow...Nolan was able to connect with me (and others in the theater) to form a strange empathy with all of us to the point that I don't think there was a single person present that had any other thoughts except the story.

Dunkirk (at least for me) captured 100% of my attention.

If you haven't seen it, you really should go. Pay for an IMAX ticket. It's worth the price.
Posted by Michael Offutt, Phantom Reader at 12:01 AM

Email ThisBlogThis!Share to TwitterShare to FacebookShare to Pinterest
Labels: Dunkirk, Dunkirk left me a little shell-shocked which is to say that it's an incredible film