Was Brandon Stark in control of Nymeria in Game of Thrones' Stormborn? 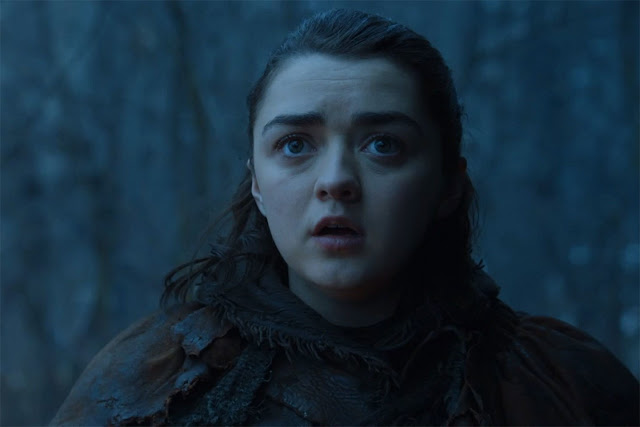 In "Stormborn," the second episode of Game of Thrones seventh season, the most interesting occurrence might have happened in the woods with no one around but Arya. The scene unfolded like thus: Arya was by a campfire, her horse tethered to a tree or bush slightly behind her, when it became clear that the horse was becoming more and more agitated. Wolves started to show up, and they circled her as if guided by something that had commanded them into some kind of formation.

Before too long, a giant dire wolf showed up. All of us jumped to the conclusion that this was Nymeria, Arya's long lost wolf from season one episode 2, when she was forced to chase it into the woods to avoid a killing by order of the Queen (for having bit Joffrey). Sansa's wolf (still a pup) was put down and suffered the fate that was intended for Nymeria. I'd long wondered if that wolf had some part to play, and I suppose with its introduction, the writers are saying that it definitely does.

Arya of course, tried to talk to the wolf to get it to recognize her. She said, "Nymeria, it's me, Arya." And the wolf seemed to recognize her because it left along with its pack of much smaller wolves. Arya wanted Nymeria to follow her to the north, and there was disappointment at first as the dire wolf left. However, then there was something that I didn't quite understand that happened. I had to watch it twice to be sure. Arya says, "That wasn't you." Then she has this look of understanding that crosses her face.

I think what happened is that Arya has spent so much time in the presence of followers of the Many-Faced God that she believes she saw something in Nymeria's eyes. I think that person was Brandon Stark, who is now south of the wall, probably feeling safe, and exploring the world through his warging/three-eyed raven powers. I think Bran saw Arya through the wolf's eyes, and she recognized him. Maybe not enough to put a name to it, but it certainly would explain the wolf formation and the absolute command that the dire wolf seemed to have over its pack.

Anyway, this is just a theory (one of my own that's not from the internet). But it's just possible that we saw how Brandon expects to use his power to help out his family.

What do you guys think?
Posted by Michael Offutt, Phantom Reader at 12:08 AM