I'm totally buying the homonculus theory about the Cars universe. 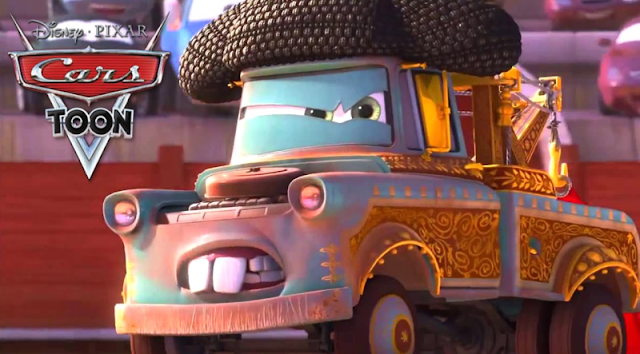 I rewatched Cars on Thursday night with my buddy Brad. We did that after I cooked dinner, which consisted of lamb chops in an anchovy and caper sauce and paired with saffron-infused carrots and potatoes (whipped together) with butter and cream. The sauce made an excellent gravy by the way. We also had corn on the cob and the wine was a red Berringer. I didn't take any pictures but trust me, it looked awesome.

The reason we watched Cars is because Cars 3 is coming out next week and Brad said he hadn't seen Cars, so it was hard to get excited about it. Cars really piqued my curiosity when I came across a guy online that was obsessed with figuring out what exactly is going on in the Cars world. To be honest, I've kind of gotten to be a believer of the whole "homonculus theory," which you can read about HERE.

I'll just summarize it for you quickly. Basically, everything about the Cars world can be explained by one thing: the humans in this human-less world are actually installed inside the Cars, kinda similar to a H.R. Giger Biomechanics nightmare. 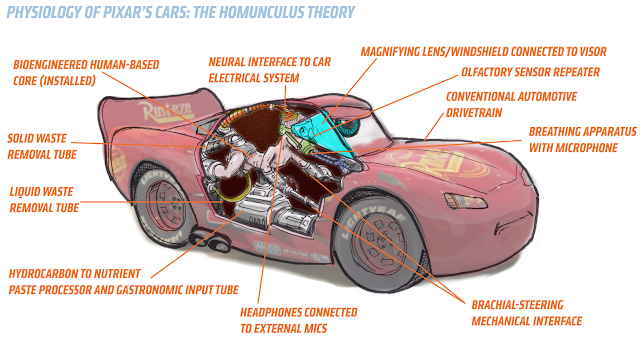 See, something happened to all the humans. Otherwise there's no logical explanation as to why everything is designed for humans to use them. Why have handles, doors, mirrors? Why have languages that match up to human languages? It's all because the cars actually have people inside of them. Even the windshields that are eyes make sense because it would be a visor projecting the human eyes onto the glass.

There's plenty of evidence online (and Pixar has even admitted) that all of their movies share the same universe. Cars has to take place at some point in a strange future when all of the humans have achieved a kind of immortality by being bio-engineered into machines. Anyway, knowing and accepting the theory proposed on Jalopnik in no way lessens my enjoyment of the shows. But it does give a new perspective for me to consider when talking with parents about the movie. After all, I don't think many people realize that Cars is a post-apocalyptic dystopia where humans are forced to live inside machines forever.
Posted by Michael Offutt, Phantom Reader at 12:07 AM