Riverdale season one had many drama-inducing and exciting moments and this makes it a pretty solid binge-watch choice for you Netflix peeps. 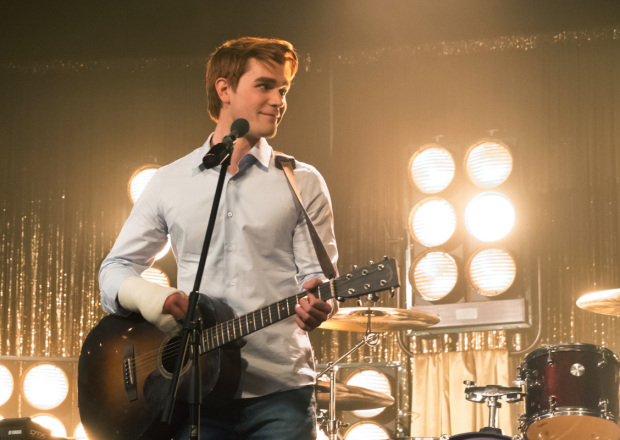 I just watched the Riverdale season finale, and I gotta say, it turned in a pretty solid season one. I loved seeing lots of names I recognized from my youth: Luke Perry, Skeet Ulrich, and Molly Ringwald made multiple appearances and/or got cast as interesting characters in the Archie comic adaptation. This is pretty much a "modus operandi" of the CW, as they tend to honor names of the past by casting them in relevant shows. There was lots of drama, eye candy (sweaty sleepless nights are so good), great music, and a story arc that encompassed an entire season. The story arc was pretty brilliant because it dared to blend darkness into an otherwise perfect recreation of a Normal Rockwell-inspired town. Everything is better with a touch of darkness. You just can't go overboard.

I also liked the ultimate message of Riverdale. Betty (in addressing the 75th anniversary jubilee attendees) summed it up by saying that essentially everyone was Riverdale. You can't just take the good, but the bad characters as well. Stop hiding behind lies and facades and pretending that things are greater than they actually are. This is a very relevant idea to anyone that has combed the curated pages of a normal Facebook feed. We live in a day and age where people are able to influence public perception by simply posting things on social media. It doesn't matter if we live misery-riddled lives because no one will ever see the dark underbelly. They won't ever see the truth, because (as Jack Nicholson famously yelled, "We can't handle the truth."

The thing I enjoyed most about Riverdale was that it showed us these wonderful young people and put them in terrible situations of suicide, murder, fraud, drug-trafficking, and rape. How could you go wrong with fiction like that? Bring on season 2. Oh and for those of you who haven't seen it, the entire season hits Netflix on Thursday, so you can totally binge watch all of Riverdale. You even get some extra stuff with Cole Sprouse (as Jughead Jones) eating a hamburger. I guess there was some fan outrage that Jughead wasn't pictured on screen enough wolfing down burgers.