Today is Alien:Covenant release day! To celebrate this special follow-up to the story which saw its "germination" in Prometheus, I thought I'd share some Alien xenomorph knowledge with you (the xenomorph is the name of the creature created by H.R. Giger and which has concentrated acid for blood). In terms of what most people know about the xenomorph, nearly everyone is familiar with the idea that it bursts out of an animal's chest after a facehugger creature (hatched from a leathery egg) deposits its load in the host's esophagus. 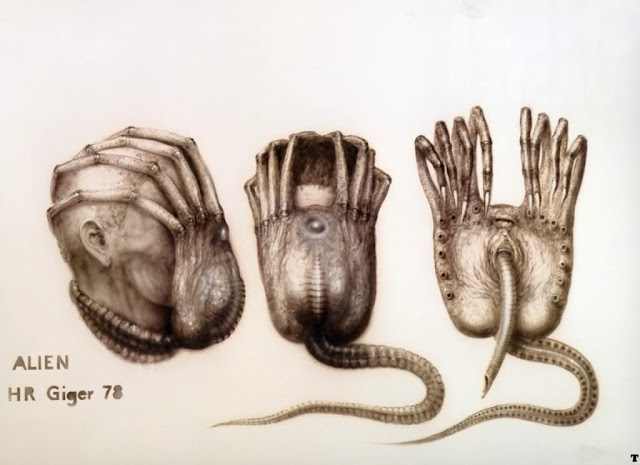 So here's some knowledge that's considered canon, and it's from the 1993 issue of the official Aliens magazine:

"While the term 'impregnation' and 'implantation' are liberally used to describe this process, they are not strictly accurate; studies by Lasalle Bionational have shown that no actual embryo is inserted into the host. Instead, the infant Xenomorph begins its life as a knot of specifically tailored cancers that bring about chemogenetic restructuring of the host's cells, essentially "building" the chestburster from the host's own biological material at a cellular level."

So the Facehugger deposits a tumor into a person's esophagus, which then co-opts its host's cells, and grows into the xenomorph. That they knew this all the way back in 1993 just adds validation that the Alien vs. Predator movies were indeed terrible and should in no way be considered canon. Also, for decades there has been this idea behind the original Alien that it was in fact some biological weapon created from material that could co-opt genetic material from a living host. In other words, it wasn't just something that Ridley Scott pulled out of his ass to make Prometheus.

I'm looking forward to seeing the movie tonight, and I can't wait to review it on Monday. In the meantime, if you are out and about and see an alien penis snake and are a scientist, it still wouldn't be advisable to reach out and pet it.
Posted by Michael Offutt, Phantom Reader at 1:28 AM

Email ThisBlogThis!Share to TwitterShare to FacebookShare to Pinterest
Labels: Alien Covenant, Facehugger, It's Alien Covenant release day so I thought I'd set the record straight on facehuggers