Pirates of the Caribbean Dead Men Tell No Tales was fantastic. 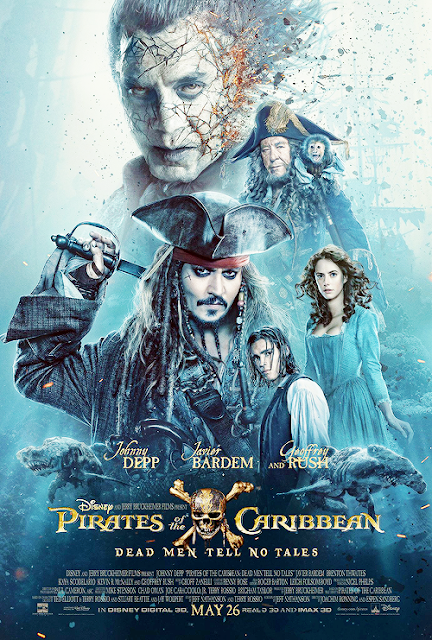 I am a Johnny Depp fan. That being said, last night I ate sushi and then went to the Pirates of the Caribbean movie, all with my best friend in tow. "Arr matey...fish and pirates seemed like the right thing to do." You might be wondering, "How was Dead Men Tell No Tales?" So here's your spoiler alert (read no further if you want to be surprised by this amazing film). I truly loved it.

I'm actually not sure which part was the best part since it was all good. Brad pointed out that the bank robbery scene was clearly an homage to one of our favorite movies: Fast Five. The fifth installment of the Fast and the Furious franchise ended with a car chase through Rio wherein Paul Walker and Vin Diesel were driving super revved up cars pulling a bank vault down the streets like a wrecking ball. It was f'ing awesome, and one of the outstanding highlights to the entire franchise.

And then there were the zombie sharks. I'm in kind of a love/terrified relationship with sharks, and these were done really well and even scared the bejeezus out of me in one scene. After watching the show, I was pretty much convinced that zombie sharks should have been a part of The Pirates of the Caribbean franchise since the very beginning. The villain was very well done too (the keeper of the zombie sharks).

I also liked how they wove the disparate story lines together. When last we saw the Black Pearl, Blackbeard had put it inside a bottle and kept it among a collection of ships on his magical vessel. Getting the Pearl out of the bottle was a key plot point, followed then by the appearance of the monkey which had been trapped inside the bottle.

The show had lots of running gags, and it has excellent pacing and special effects. The story is really tight too (trimmed down to about two hours whereas some of the others were pushing three). If you are looking for a movie to go to this weekend, I don't think you could go wrong by seeing the latest installment, which (like the others) will probably go on to make a billion dollars. Disney pretty much mints money these days, but it's not like they don't deserve it.
Posted by Michael Offutt, Phantom Reader at 12:04 AM