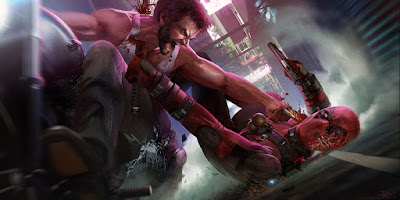 This weekend you probably saw Deadpool. Your neighbor probably saw Deadpool. I saw Deadpool. It's a great, fun time at the movies despite my not knowing too much about the character (other than he breaks the Fourth Wall). But is its success (given its relatively small budget) a clarion call for other movies to take the plunge into rated-R? I guess so, because Wolverine 3 is going to be rated-R. So, is this a marketing ploy? Like how is it exactly that a studio can just decide a movie is going to be rated-R since (I think) the rating gets applied to a film by the MPAA after it's done, right? Or maybe film ratings are completely useless. It's possible both of these situations could be correct at the same time.

So naturally I have questions. What exactly is the new Wolverine going to be packed with? More blood? Because I know it can't necessarily be packed with more action because the last Wolverine was damn near wall-to-wall action. It kind of makes me think that Fox believes that "adult" is the new "dark and gritty" ala the Batman movies by Christopher Nolan. But is it really? Having seen Deadpool I can say that I don't think that movie could have been released as a PG-13 movie and kept it's cool. But would Wolverine really benefit from an R-rating? Are there that many tits that need to be displayed (or that many "F"-bombs that need to be dropped) in a story of our favorite mutant with bone claws?

Or maybe they want to borrow a page from Quentin Tarantino and take the films into some macabre, tongue-in-cheek place where limbs get severed and blood fountains upward like geysers from severed heads. I suppose that could be fun, but it's difficult to capture what gives Tarantino movies that special grittiness so that you can spot them from a mile away. It also makes me beg the question about the X-Men universe. Are we now going to have R-rated X-men movies? How can you possibly integrate characters like Deadpool into a pg-13 universe and not have the character lose all of its luster?

Meh. Maybe all of these changes are a sign that Fox is going to brand itself as the studio that has the dark and gritty characters. I suppose I don't care and I'm somewhat eager to see the result. I'm just surprised that Deadpool had the clout to change the way an entire industry does business.
Posted by Michael Offutt, Phantom Reader at 7:15 AM

Email ThisBlogThis!Share to TwitterShare to FacebookShare to Pinterest
Labels: Deadpool, So Deadpool has been out less than a week and it's already changing the industry