The Walking Dead introduced Jesus and Richonne became a thing so could a tiger named Shiva be next?

Walking Dead spoilers ahead folks. You have been warned.
Yay. For once, the Walking Dead had a relatively good episode where none of the major cast members died, and we met an interesting character (that's in the comic book adaptation) that isn't a total douche bag. For what it's worth, I've been really looking forward to the introduction of Jesus from the comics. And from what I remember, the way in which he is introduced in the show pretty much mirrors how it happened in the graphic novel. For one, Jesus was this guy that could do all kinds of martial arts moves and secondly, he was an incredibly nimble escape artist. We saw both of those in the episode that aired last night.

So the Walking Dead's world is about to get blown up really big. Jesus is from this community that has like 200 people living in it and they have chickens and livestock and a wall and more resources than even Alexandria has. And they're actually pretty nice people. There's also a third community that's called "The Kingdom," which will be introduced through Jesus. So he's kind of a big catalyst to move the show in an entirely different direction. 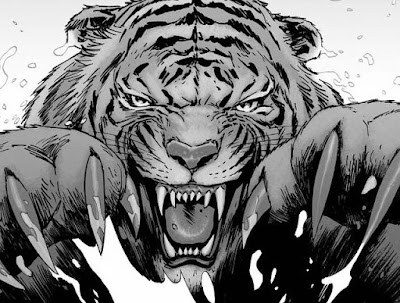 The Kingdom is ruled by a very colorful character called Ezekiel and he has a pet tiger named "Shiva" that he keeps on a chain. A former zookeeper with delusions of grandeur, in the post apocalyptic world he's essentially a benevolent king with a unique fascination on medieval life, i.e., he holds court, calls himself a king, and has knights. Interesting, right? I guess you gotta do something in the apocalypse to keep yourself busy. And I think it's going to be really cool for the Walking Dead to introduced a tiger...I really do. 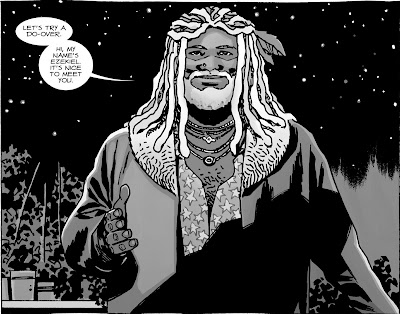 All of this is to prepare viewers for basically all out war between those three communities (allying together) to fight Negan because he's that awful. I'll be curious to see how the television show handles Negan because he monologues a lot and says "F*ck! F*ck! F*ck!" all the time. Of course, the show does differ from the comic in major ways. For one, there's no Daryl. And for another, I can't quite remember Rick and Michonne getting together, so I'm glad to see it happen on the show. It seemed very organic and honestly, they're perfect for each other. They're both tough as nails, and she's Rick's moral center for pretty much everything.

I don't think we're going to be seeing the kinds of people that aren't suited for this world anymore. The apocalypse happened years ago and people are adapting to it in so many creative ways. Anyone that couldn't adapt just died so it really is the rise of a new world order doing things in a different way and just learning to manage the zombies. So in a way, Jesus is an obvious biblical symbol. He represents a rebirth for everyone that's made it that far and now will open the minds of those who managed to survive.

This show really is the most brilliant thing on television. Thank you Robert Kirkman. :) You've made Sunday nights so awesome.
Posted by Michael Offutt, Phantom Reader at 12:12 AM

Email ThisBlogThis!Share to TwitterShare to FacebookShare to Pinterest
Labels: Comic Books Rule, King Ezekiel, The Kingdom, The Walking Dead, The Walking Dead introduced Jesus and Richonne became a thing so could a tiger named Shiva be next