Is Madame Gao from Daredevil season one going to appear in Netlix's Marvel adaptation of Iron Fist? 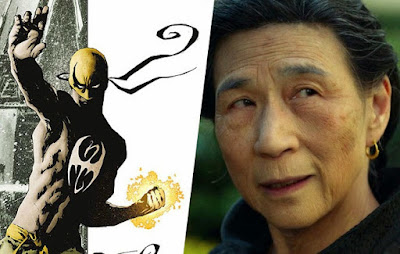 As Netflix gets ready to spring Daredevil season 2 upon us next month, I wanted to take a look at one of the most interesting villains of Daredevil season 1 and bounce some ideas off of those of you who've watched it.

Right from the very beginning, Wilson Fisk a.k.a. Kingpin was surrounded by fellow crime lords. One of them was a ninja (Nobu) and another was the enigmatic Madame Gao who (in one scene) declared that she could speak any language. I don't know about you, but that was impressive. And then of course there's the scene where Daredevil confronts Madame Gao in her heroin-stuffing warehouse and she throws him twenty feet with a single punch. But this isn't the last dangling hook this character drops. That particular hook happens when Madame Gao is talking to Leland and she says she's going to be returning to her homeland to reflect upon things. He scoffs and says, "What? China?" And she replies that her homeland is much further away than China and just leaves it at that.

Well...what the hell does that mean? My opinion is that it means K'un Lun.

K'un Lun is the home of the immortal Iron Fists (which we now know Netflix is making into its own series). It is a city of aliens that isn't always where it's supposed to be, sometimes vanishing only to reappear many years later. It's also one of the Seven Cities of Heaven, who all periodically pick champions to fight in a Mortal Kombat-style tournament to decide which city gets to appear once every ten years on Earth. If Madame Gao is from K'un Lun, I'm thinking we haven't seen the last of her and that she's probably going to crop up in the Iron Fist series as soon as it's available to binge watch on Netflix. Perhaps she's even a major villain, but I suppose that wouldn't necessarily be too much of a spoiler now would it?
Posted by Michael Offutt, Phantom Reader at 12:27 AM