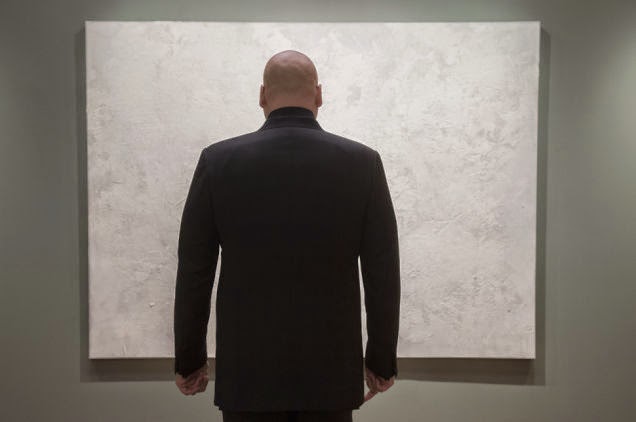 Are we living in the golden age of comic book adaptations? My answer is yes. Disney (when its not out to hobble its competition) is making some pretty damn good screen gems. The clip online of Iron Man's Hulkbuster and the Hulk broke yesterday and got me even more excited for the Avengers: Age of Ultron (which I get to see in Portland by the way). The reason for my trip is going to be to see my best friend James, but I also get to have dinner with the Chubby Chatterbox himself (and his wife) at some restaurant called Decarli, which in his words "has mussels and short rib that are to die for."

Additionally, we've got the Flash and Arrow on the CW, we've got Agents of S.H.I.E.L.D. on ABC, we get Fox and Sony pumping out new movies on the comic book characters that they own the rights to, and now Netflix has joined the bandwagon by adding Daredevil.

I knew nothing about Daredevil other than the terrible Ben Affleck film, but I gotta tell you, Netflix has made it "bloody fantastic." I watched eleven of the episodes just this weekend (out of 13) and I'll finish up this next weekend. I can't wait because it feels like one huge movie, with plot points bleeding into the next show to form this over-arching plot with incredible gun kata action, old blind guys who are martial arts masters, and ninjas! How could you go wrong with ninjas?!

Kingpin, a.k.a. Wilson Fisk is so well-developed. His obsession with art seems like a clever page torn from the Hannibal Lecter playbook. Hannibal revered art because it was how he kept his memory. For Fisk, the connection to art is more personal, allowing him to glimpse unsavory parts of his past that made him the man that he is today. The formation of his villainy is bad parenting which seems a bit cliche, but hey, it works. His dad was a real tool.

More than anything though, I think the Daredevil series does a fantastic job in capturing what makes a comic book so addictive, i.e., combining a soap opera with evil and with things that guys like. The violence is awesome, from bashing a guy's head so many times with a car door that it decapitates him, to the cut of people washing that same car out with a hose. It's gory, and it's filmed with real sets (no green screen) and you can tell the difference. And the writing in this show is sharp as a tack. It may just be one of the best live comic book adaptations that I have ever seen.
Posted by Michael Offutt, Phantom Reader at 7:03 AM

Email ThisBlogThis!Share to TwitterShare to FacebookShare to Pinterest
Labels: Daredevil, Daredevil is one of the best live action comic book adaptations that I have ever seen, Marvel comics