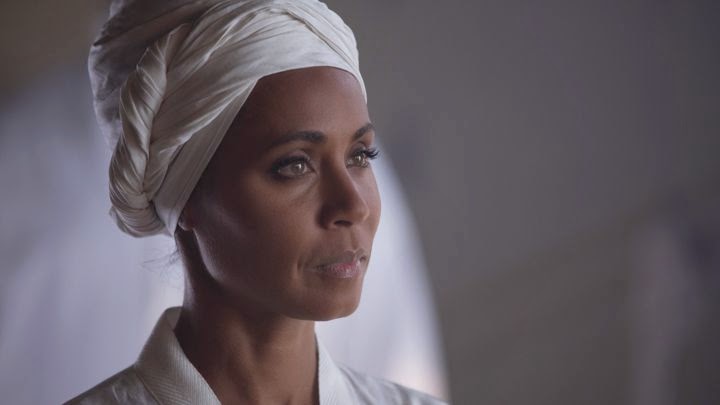 I didn't see that coming, at all. Monday night, I perhaps like most of America sat before my television with my evening meal and was wondering how Fish Mooney was going to get out of the pickle she's landed in.

Fish Mooney (as you may already know) is played by the incomparable Jada Pinkett Smith. She's basically been given an opportunity to define and characterize a new villain for the Batman Rogues Gallery, and she's playing it to the hilt. I've got to hand it to her, because she manages to be the right kind of psychopath that seems perfectly at home in the city of the Dark Knight.

The situation that forced her to carve at her own eyeball with a spoon arose from being a prisoner in some kind of institution ruled by folks who are harvesting body parts from people to sell to the wealthy. There are literally hundreds of people all milling around in a basement complex, fearful, broken, and one by one they are led off only to return (sometimes) with a piece missing here or there. The horror of being unable to escape from a fate so horrible made me cringe. How on earth could you fight back against that? Well leave it to Fish to find a way.

She recognized immediately that the den of prisoners had a leader and took him out. Then she organized everyone so that she would call the shots when they came for someone to go along and get a part cut off for a buyer. Because the institution needs body parts that are alive and in good shape, she promised the guards that if they did not acquiesce to her demands, she would kill every name that the guards called. Of course they tested her and called out a name, and Fish ordered that unlucky person murdered to prove she means business.

Well she got taken to the man in charge, and he thought he had her in a corner. "You have two options. 1) We take both of your eyes. 2) We kill everyone in the basement and just start over. It'll be a high price to pay but that's how it's going to be."

Fish had a third option (of course) and since it was her eyes they wanted (presumably for someone willing to pay for them) she wrenched one out of the socket and squashed it with her foot. So much for having a matching pair.

It left me in shock, asking myself, "Did that just happen?" And realizing it was Fox (a mainstream channel) and not airing on AMC (home of The Walking Dead) gave me a double-take. Unfortunately, the story didn't return to Fish and went on to the other characters and what they were doing, which ended up being far less interesting in terms of content and shock factor. I have questions now, dammit! What happens to Fish as a result of her actions? How does this move gain her power among the crew of psychopaths harvesting organs from helpless people?

I think Gotham is finally turning into the nitty gritty drama it was meant to be.
Posted by Michael Offutt, Phantom Reader at 7:03 AM

Email ThisBlogThis!Share to TwitterShare to FacebookShare to Pinterest
Labels: Fish Mooney scooped her own eye out with a spoon and in that one move made Gotham must watch television, Gotham