The lack of Material X is not a reason to deny funding to NASA, guys.

In exciting "theoretical" news, NASA is asking for funding for the research into a spaceship that can travel faster than light, and the only real hitch is the existence of "exotic matter," which hasn't been found anywhere, in any form. This should be exciting, right? I mean if you've got the entire design completed and all you need IS material X, then this at least gives you a direction in which to look. And unlike earlier designs, instead of needing enough of this matter to equal the mass of the planet Jupiter, we now only need a few hundred kilograms. That has to be somewhat manageable, even if it means that CERN (or an even larger collider yet to be built) is the only thing capable of producing it.

So assuming we had "material x" then how would this thing work? 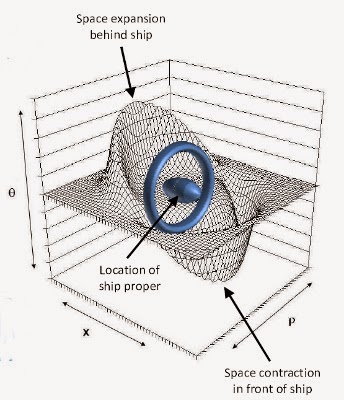 It works on the simple principle of space expansion and contraction. Basically, it's not going faster than light but bending space-time (which we now know is flexible because gravity affects it). The effect though is faster than light travel, i.e., the ability to visit other star systems. Yay!

The warp bubble when it is created will be an odd thing because the interior is going to be an isolated pocket of space-time while the exterior is an altered ripple in space-time. This means that the ship is going to essentially be traveling in its own universe with its boundaries being the bubble. In other words, radiation (and other things) won't have anywhere to go. But theoretically, it could fly through a planet because it will be in its own universe and won't experience anything outside the bubble.
There will need to be other materials that protect the ship from exotic particles associated with "material X" too because we don't even know what "material X" does to humans. And there's the whole tricky thing about momentum being conserved in the bubble and how when you exit, you may have the orbital velocity you had at Earth, which would be inappropriate for a planet with dissimilar gravity. Oh and according to "Researchers from the University of Sydney" who've done some advanced crunching of numbers regarding FTL space travel, a concentration of space particles "swept up" into the warp bubble would get focused behind the ship so that when it decelerates from superluminal speed, these particles get released in one energetic outburst essentially destroying anyone at the destination point directly in front of the ship. That's kind of a problem.

But let's not focus on the negative and just look at how cool it will be when we actually have a Star Fleet Academy and earthlings can finally get past all the petty squabbling that have defined our species for thousands of years.
Posted by Michael Offutt, Phantom Reader at 7:13 AM

Email ThisBlogThis!Share to TwitterShare to FacebookShare to Pinterest
Labels: Faster than Light travel, NASA, The lack of material X is not a reason to deny funding to NASA guys