It doesn't matter if you're a Mountain or a Red Viper because too many words just gets you killed. 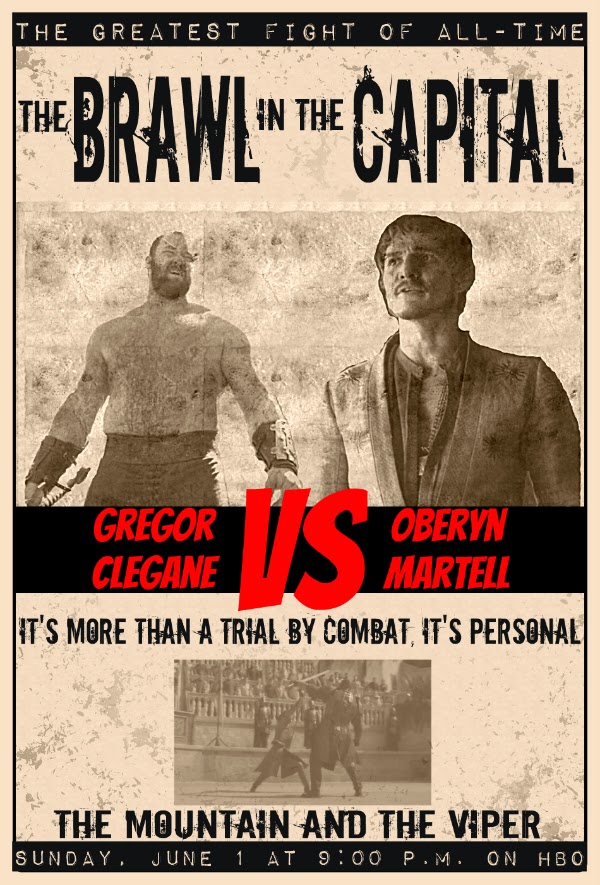 The battle for Tyrion's life happened on A Game of Thrones last night, and I think that the whole point of the epic fight between "The Mountain" and "The Red Viper" is that too many words are pointless and often get you killed. The episode starts out in Mole's Town and Ygritte saves Gilly and her baby from slaughter by simply holding a finger to her lips to indicate that Gilly's silence will spare them the fate suffered by everyone else. Over in the Vale of Arryn, Sansa uses just enough words to corroborate Littlefinger's story and spare his life. Certainly too many words or the wrong ones would have changed that situation utterly. And across the Narrow Sea in Mereen, Daenerys sends Ser Jorah packing because his loose lips in exchange for a pardon from the "usurper of Westeros, Robert Baratheon," are the deepest of betrayals. Though he begs for forgiveness, she throws Ser Jorah from her good graces (presumably) forever.

But the biggest clue to what the episode may have been about (for me) was the pointless story that Tyrion and Jaime exchanged in Tyrion's cell regarding their "simple" cousin who smashed beetles. "Clack Clack Clack" would sound the rock as this cousin (who died when a horse kicked him) smashed beetle after beetle in the garden back at Casterly Rock while Tyrion looked upon him in vain trying to figure out why he did it. It's pointless because it was long, and rambling, and in the end neither Tyrion or Jaime had any clue (even years later) as to why their simple cousin made all that noise and littered the family garden with beetle carapaces. Indeed, the point (if there is one at all) is that people who talk too much end up dead and Tyrion is no exception.

And maybe that's why the Red Viper was always doomed to die at the hands of The Mountain. Of course, you all know I'm not stranger to the books so I knew that this was going to be Oberyn Martell's fate. However, if A Game of Thrones isn't about young men trying to overcome the wrongs done to their families then what is it about? Many of us got lured into the idea that this story was about a young boy who would avenge the death of his father (Robb Stark and Ned Stark). But at last year's "Red Wedding" episode, we realized in bloody dissatisfaction that this is not the case.

Could we actually expect Prince Oberyn to get justice for Elia (who was at one time married to Prince Rhaegar)? The slights and deceits dealt to Tywin's family by the Martells are deeper than Old Nan's tales of the snows in winter. And the injustices done to the Martells by the Lannisters were brutal, even by the low standards of an entire kingdom at war. It's in this aspect that I think the show runners of A Game of Thrones are creative geniuses working with material that is arguably just as brilliant, but on so many levels that I can't name them all. And the Red Viper vs. The Mountain fight was everything it promised to be: brutal, gory, and grimly satisfying if you like to see how powerful families destroy one another.

Oberyn didn't merely want to kill The Mountain. He wanted to make The Mountain confess to raping his sister and killing her children. He wanted The Mountain to call out that Tywin had put him up to this; to throw more "king slayer" blood on the Lannister name, and because he got caught monologuing by The Mountain's long reach, he died and took Tyrion with him. However, it's pretty clear that the Mountain will die from the wounds inflicted upon him; Oberyn sliced him up very nicely. I shall miss the Viper, I shall not miss The Mountain.

Having watched this episode, I certainly understand more and more the feelings that run through Jaime Lannister's head at the end of A Dance With Dragons when he's standing in a doorway and watching the snow fall out of the sky. There's this big moment of silence as we realize through his thoughts that Westeros is utterly helpless now because all of the great families have spent the long summer destroying each other and now have no strength left to turn back the White Walkers, much less survive a winter that will be the longest and coldest the world has seen in ten thousand years.

Perhaps in the end, all of Westeros is to go the way of the Mountain and the Red Viper. I wouldn't put this past George R.R. Martin at all. This author (if ever there was one) could end this series by killing everything and everyone in an apocalypse of ice and fire. I think I would laugh then and look back at this post, because I guess all the words spoken by everyone and everything could be said to be too many. In the end, they got everyone killed.
Posted by Michael Offutt, Phantom Reader at 6:53 AM

Email ThisBlogThis!Share to TwitterShare to FacebookShare to Pinterest
Labels: Game of Thrones, It doesn't matter if you're a Mountain or a Red Viper because too many words just gets you killed, The Mountain, The Red Viper