Inherited wealth provides such a staggering income advantage that it really is ridiculous. 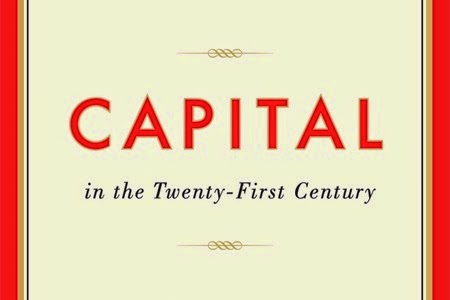 Unless you've been living under a rock like the cavemen in the now infamous Geico commercials, you might have heard of Thomas Picketty. But in case you haven't (or are more concerned with things like Candy Crush) he's the author of a 700 page academic book published by Harvard University Press, and it's filled with dense mathematical formulae, graphs, and footnotes. You might ask, why on Earth is Mike interested in reading something that sounds so difficult to understand? Well, currently it's at the center of a firestorm in the United States regarding the debate of income inequality because it questions whether capitalism actually has the power to improve our quality of life. And when I say "our" I mean you and me who don't count ourselves as being rich, who drive old cars, and have a bad day when an unexpected bill for $700 arrives on "our" front doorstep.

If you take the time to read Picketty's book, Capital in the Twenty-First Century, and you unashamedly admire rich people because you think they worked hard for their wealth and that this same opportunity is there for you if you just try hard enough, you're probably not going to like the answer. Piketty basically calls capitalists on all their lies, debunking everything they've said for years regarding the ethical status of making money. The most profound lie may be this: that the commanding heights of the economy are controlled by talented individuals.

Picketty spent two decades studying inequality and currently teaches at the Paris School of Economics. I watched him on Squawk on the Street this week, and he's made the rounds on the Colbert Report and just about any media outlet you can shake a stick at. At the center of Picketty's work is not that a huge amount of wealth is concentrated in the top 1% of earners, but an analysis of what's causing this: the process of saving, investing, and building wealth. Picketty defines "capital" as any asset that generates a monetary return. He also believes that the inequality can't be separated from politics.

The examples of how much wealth has diverged within the lifetime of many baby boomers is staggering. In the 1950's the average American CEO was paid twenty times as much as the typical employee of their firm. Today, this ratio is 200 to 1. A popular model of economic growth by Robert Solow shows how the economy progresses along a balanced growth path with the shares of national income received by owners of capital and labor being pretty much constant over time. In reality, the share of income going to wages and other forms of labor compensation has dropped from 68% in 1970 to 62% in 2010. This is a decline of a trillion dollars. The richest 85 people in the world own more wealth than the roughly 3.5 billion people who make up the poorest half of the world's population.

Those of you out there who are fans of Jane Austen may support this kind of inequality in the United States because it means the emergence of a patrimonial society. If Picketty is believed (which I think he should be) then it's safe to say that your children will be living in a land where a few dynasties live lavishly on the fruits of their inherited wealth while the rest of the country struggles to put food on the table. Pickety points out that the share of the top income percentile is bigger than it was in South Africa in the 1960's, and in terms of income generated by work, the level of inequality is higher than in any other society at any time in the past, anywhere in the world.

In my opinion, inherited wealth provides such a staggering income advantage that it's ridiculous. Let me show you by example what I would do with just a million dollars (a laughable sum by today's standards of "being rich"). If I had a wealthy family and they offered to loan me one million dollars for just five years, and it was interest free, I'd totally take them up on that offer. Hell, I'd take anyone up on that offer. I would take the money and buy $1 million in AT&T stock or in BP (British Petroleum) and generate a staggering $50,000 a year in dividends alone. This would double my income for five years and put $250,000 in my pocket that I didn't have to lift a finger to earn. And in that time, the price of the stock would probably inch up and then I'd scoop some more money on the sale of the stock and return the million. That's how powerful inherited wealth is. Oh, and on that $250,000, I'd only have to pay a 25% capital gains tax. I wouldn't have to pay any social security at all and when I sold the stock in which I had the million invested, I'd only have to pay a 15% capital gains tax (and again...no social security). Pretty nice gig, right?

And what would I do with the $250,000 in dividends? I'd again, invest that in a stock with a dividend paying 5%. This would effectively increase my current wage by 60%, adding $13.00 an hour to what I make now. Considering that in the six years that I've worked my government job here in Utah I've only managed to increase my wage by $3.00, this is amazing. Here's a sad fact for you: now that it's June, I'm looking forward to my "yearly cost of living" raise, which (this year) is a generous .23 cents an hour. Yes, I get a .23 cent raise for 2014. Suddenly, all that was fuzzy has now become crystal clear.

Not surprisingly, I've joined the chorus of those who, like Picketty, are calling for a wealth tax with the idea of restraining the immense power of inherited wealth. In the least, people should wake up to the fact that those who defend unrestrained capitalism will push America to be a land that would be unrecognizeable to those in the baby boomer generation. If we don't get a reign on this out-of-control wealth generation, poverty may just end up as the new face of America by the end of the century as we're ruled by oligarchs who were just lucky enough to be born into the right family.
Posted by Michael Offutt, Phantom Reader at 12:04 AM

Email ThisBlogThis!Share to TwitterShare to FacebookShare to Pinterest
Labels: Capital in the Twenty First Century, Inherited wealth provides such a staggering income advantage that it really is ridiculous, Thomas Picketty