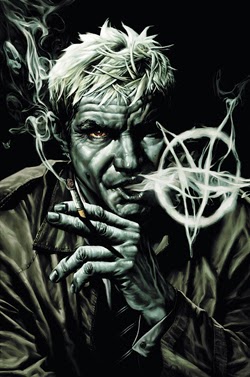 I used to read Hellblazer in my younger days. For those of you unfamiliar with the comic book line, Hellblazer introduced the streetwise magician John Constantine to the majority of the comic-reading world. A work of genius really, I can now say that it's one of the first comic lines that introduced me to Alan Moore's genius (which also graced Swamp Thing and made it the must read comic book of its day).

Anyway, as most of you already know, Constantine is making his appearance on television this fall. I know we got some horrible Keanu Reeves knockoff a dozen or so years ago (I don't count that as a Hellblazer adaptation). And also...it was a movie. A television series is a different medium and is a far cry from the silver screen because of its ability to be episodic just like a single issue of a comic book. Television has the ability to fully encapsulate story lines that could take an entire season to incubate. I find the very idea of this exciting. But I'm not quite sure I agree with the character edits that are happening. Namely, Constantine's chain smoking and the lack of it we'll be seeing in the television series.

There are many quirks that make John who he is. For example, John's cigarette of choice is "Silk Cut." It's a brand of cigarettes produced by the Gallaher Group, which is a division of Japan Tobacco. Additionally, he's the only character that I know of who aged in real time, meaning that every real year that passed actually made him older in the comic book.

Now, I know the reasons for not wanting to glamorize smoking on network television (or even feature it). But interfering with this character's ability to toke on a Silk Cut is going to handicap it. In other words, as I watch the series I'll be thinking in my mind that this isn't a faithful adaptation to the blue-collar warlock that I remember from my youth.

So what do you think? Should characters with destructive habits be altered to make them more acceptable for a television audience? Constantine fights vampires and demons. How is smoking worse than that?
Posted by Michael Offutt, Phantom Reader at 6:54 AM