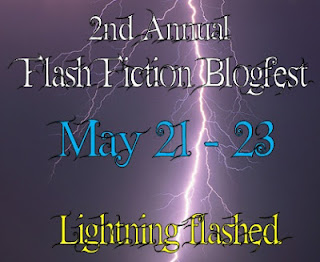 HERE ARE THE RULES (Taken from Cherie's blog):
On May 25, Cherie will announce the six finalists and open voting through May 28th.

On May 29th, Cherie's 3rd year blogversary, she will announce the 1st, 2nd, and 3rd place winners as well as a random winner selected from the participants list. All ties will be broken by Random.org.

For my entry, I wrote a short piece with a dark fantasy flavor. It's in third-person omniscient and 287 words.

Rain wreathed around the obsidian parapets and domes of Zanda in a gossamer death shroud of winter. The moisture left the cobblestone streets glimmering black. Kian and Renfro stood beneath the notice of powerful men in the long shadows cast from the Blades Acuuarum, the training grounds of the Cataclysm Slayers of Zanda. Freezing water dripped from Kian’s long eyelashes; his cloak was soaked completely through.

They’d been out here for two hours.

He rested his armored palm against this ancient edifice built upon the edge of the Well of Zanda. The Hall of the Blades Acuuarum had been erected by Blackstone Giants, quarried from the pits by slaves who toiled with pickaxe and shovel at the base of the Mountains of Illusion that rose like the sharp finger bones of massive skeletal warriors in the East. Each considerable rock in the foundation stood taller than Kian; its weight unfathomable to him. The fortress itself was monolithic; it soared above the two thieves with one-hundred foot bulwarks.

On the far side of the fortress lay a sheer drop of almost a thousand feet into the turbulent fluorescent waters of the Well of Zanda. At night, the Well was a terrifying sight. By day, it wasn’t much better. The waters flowed a putrescent green and circulated in a counter-clockwise motion around a blackstone mountain that rose from the very center. The mountain was home to the Librarium Apocalypto, the palace of the Dreaded Irtemara, and the Basilica of Zanda. These three structures fused together into a towering castle that rose above all things in the city. It was accessible only by a single bridge in the shape of a serpent’s tongue and flanked by unmoving colossi.