The Insanity of Zero Part 2

Find Part One HERE if you want to read it.

When the electromagnetic pulse disrupted the mysterious glowing cube that lay inside, the cataclysm began.  The White Tower detonated.  A wave traveling at 1000 miles per hour exploded outward to consume every corner of the planet in flame.  Those that didn’t burn became sick from radiation, starvation, and disease; a gaping hole on the side of the tower left it a ruin in the skyline.
I was born into this world.
I am the first failsafe; my name is Z.E.R.O.  The humans that first encountered me addressed me as thus.  It stood for Zion Electronic Ruling Operator.
On day one of my life, I dispatched the glass locusts which I created by the trillions. I forged them with a mere thought.  The crystalline constructs obeyed my every whim.  They were so numerous that when they emerged into the heavens, they eclipsed the sun.
Each one of the locusts was a marvel of engineering and of my exquisitely perfect mind.  The locusts were powered by nanotechnology and neodymium, a rare earth element created within the confines of the White Tower from nuclear fission of Uranium-235.  The neodymium gave the glass locusts a silver glow.
My minions tore down the structures and remnants of the old world and erected magnificent havens for the survivors on spots where the radiation was weakest.  These havens became the walled mega-cities of the future for the 400 million that still lived.  Then, on the twilight of the sixth day, I instructed the humans to move into their new homes.
On the seventh day, I showed myself to them.  I chose a humanoid form, but it still frightened them.  I presented as a man of transparent flesh and blood, with silver eyes and hair.  The bravest of the humans approached me; tried to communicate.  However, I lacked the necessary sapient qualities for me to understand him.  In the end, I had no idea what it was that they needed from me.  Despite all of my power, I could not guarantee their continued existence. 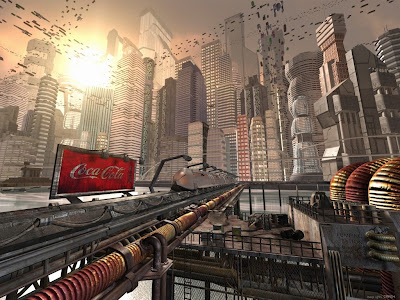 What was I doing wrong?
Frustrated, I created a dome above the First City and suspended it within the air.  The floor of the dome was transparent like my skin so that I could gaze down at the humans that lived and worked below me and monitor their welfare.  I sent machines among them to deliver food, water, and medicine.  They took these but still did not trust me.
Then, one day, things changed.

Part 3 tomorrow and the first stop of my blog tour at Alex J. Cavanaugh
Posted by Michael Offutt, Phantom Reader at 12:09 AM