I wanted to go over my checklist of things that I've learned from the internets in order to get my writing published. These rules are applicable to a debut author only. Authors that have already earned their chops can publish their laundry lists which is hardly interesting or exceptional in my opinion. Also, there is no sarcasm in my post. Otherwise I'm a dirty frickin' liar and Stephen Colbert is not an actor.

1) Show, Don't Tell. Source: Just about everyone (including Misha on her Tuesday post). When can you break this rule? When you have lots of sheeple as followers and you are essentially famous (if not A-List then C-D list celebrity still works...like the dude that got a pic of himself posted to Twitter when Paris Hilton was passed out drunk at a Hollywood sex party still works).

2) Girl point-of-view only. Source: Numerous agent blogs. Women buy books, men buy video games, drink beer, and send pics of their bare chests to single women (especially true if married because men hate the feeling that their greatness has been tied to one person--honestly--the length of a man's dick needs to be shared with others). When can you break this? If you write for an audience younger than 10 or older than 30.

3) Romance. Source: Numerous agent blogs. People who read want to escape reality. Unfortunately this means that much of reality is a cesspit where romance does not exist. People are all about the bottom line (money), want your rent check, and could care less whether you are feeling like shit. If you don't have your rent check then they are interested in you...interested in taking you to court or how soon you'll be moving out. One way or another...it's not the kind of interest you want. Hence...grab a book. When can you break this? If you write for an audience younger than 10 or for straight men.
4) A clearly defined protagonist and antagonist. Source: Numerous agent blogs. People like good vs. evil. When can you break this? When you are George R.R. Martin.

5) Include hot men. Source: Nearly every book in print. Women and gay men like their men smokin' hot with six pac abs and forever stuck in that senior in high school period of time.  When can you break this? Only if you write for straight men (good luck finding that audience).

6) Use great English. Source: Universities and professors who speak of getting published but really have no clue. You have a towering education and can put together great sentences similar to Faulkner and Hemingway. Your command of symbolism is akin to Hawthorne. When can you break this? When you are any level of celebrity even if it is so low that your only claim to fame is impregnating a failed vice-presidential candidate's spawn who defrauds her own charity to pocket an extra $200,000 a year. Those Prada shoes gotta be paid for somehow.

7) Your characters must be white (Caucasian) with blue eyes. Source: Just about every book out there. Seriously, I challenge you to tell me of a debut author that had a traditional publishing contract with a black protagonist. Hitler would be so proud of today's publishing business. Also, despite being a part of the master race and looking sexy, the woman must pine at the ripe old age of 16 at never having been kissed. When can you break this? Only if you submit your manuscript to a small press. Minority issues just screams small press, doesn't it? Because they don't make the $$$$ like the big boys do. The big presses in New York City are all white wash baby. The other exception to this is of course...fame.

8) Provide advice on crafting an amazing novel. SOURCE: Just about everyone. You've gone to school for years, learned from the best professors at University of California, Irvine, Cornell, Stanford, Yale, Harvard...and you name it.  When can you break this? There are two occasions. The first is by starting a blog. This gives you the ability to provide everyone that visits your little slice of internet heaven your own version of writing advice even if you don't have a leg to stand on. The other is by being an agent. You graduated from an Ivy League school or similar institution and needed to pay rent so you went to work for the equivalent of the Wal-Mart of the writing world (think any huge agency). By that virtue alone...you can now tell anyone how to write even if you've never published anything yourself :). 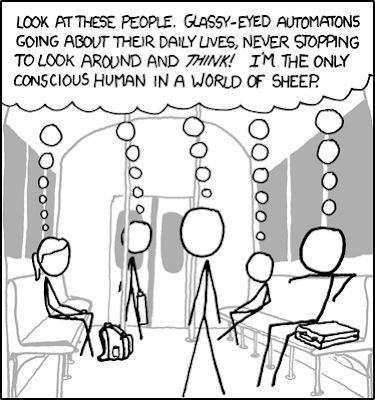 If you have done all 8 things, you are ready to query. Let me know when you are published so I can be your sheeple. I bleat.

Did I miss anything? Happy Hump le Hump Day.
Posted by Michael Offutt, Phantom Reader at 1:13 AM