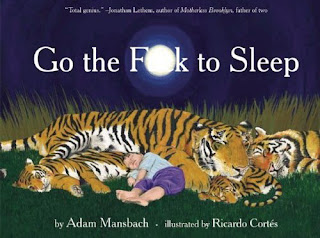 Oh this is too precious. Adam Mansbach’s Go The Fuck To Sleep is described as “a children’s book for adults,” a satirical pastiche of warm and fuzzy bedtime story tropes rewritten as a commentary on the often-frustrating experiences of being a parent—specifically the ordeal of, yes, trying to get your kids to go the fuck to sleep already. It quickly became a No. 1 hit on Amazon, had its movie rights optioned by Fox 2000, and now it’s an audiobook narrated by none other than Samuel L. Jackson, bard of the F-bomb. And by going to Audible.com, you can download it for free, just in time for Father’s Day.

Here's a sample of the read-a-long for your pleasure (I was ROFLMAO):

Posted by Michael Offutt, Phantom Reader at 3:27 AM