Foreshadowing: The Art of Good Storytelling In A Song of Ice and Fire 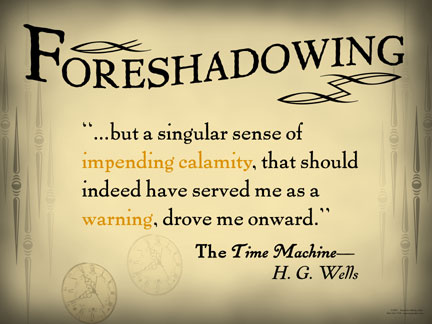 FORESHADOWING is a plot device in which an author suggests certain plot developments that might come later in a story. As much as I pick on George R.R. Martin, the man is a brilliant writer to whom I can only aspire to be as great (don't let him know that...he already has a fat head). One of the reasons he's brilliant is because the man knows how to foreshadow.

The reason I wanted to talk about this topic today is due to a short conversation that I had with writer Tamara Paulin on Monday regarding the hatching of the dragons in the television series "A Game of Thrones" by HBO during the season finale. I had expected the eggs to hatch even before I started reading the books (which occurred mid-season...around episode five). She was totally taken by surprise and even "Squeeeee'd"... This is an interesting reaction to me. How many more of you out there pay absolutely no attention to foreshadowing?

If you didn't expect this, then you need to clue into the technique, because it will make you a much stronger writer. I'm not saying this with any "writer" laurels. I don't have an agent, I'm not published, but I'm not stupid either. I'm saying this as a reader (and I happen to consider myself a damn good reader at that). So here's a reader telling you aspiring writers out there... you should use "foreshadowing".  Here are examples I have pulled from George R.R. Martin along with my predictions. Regarding some of these plot developments, I'd be willing to bet money on if you'd like (just to make it more interesting).  DISCLAIMER: None of these predictions have come to pass yet in the books so this is not a spoiler. This is simply my critical reading of the foreshadowing evident in the books/film adaptation.

1) The Wall. It's 800 feet tall and hundreds of miles long. PREDICTION: This thing is going to come down. He's already introduced a plot device that will accomplish this...a horn...in one of the books. The Wildlings refused to use it...but I don't care...the wall is coming down. You don't build something this big and then just have it stand and work.  Think of how dumb the conversation would be... "Hey, did that wall work?" Answer: "Yeah...it worked really well."  Next question: "Hey, so it's kinda boring cause it worked, right?" Answer: "Yep...it worked." /end of books.

2) The Eyrie. We've heard that it's "impregnable" over and over in the books. A fortress built on a mountain accessible by a goat path. Sansa would hate to be caught there in the winter. Oh how bleak and horrible a place it must be in the winter, etc. etc. PREDICTION: GUESS WHAT...this fortress is going to be used probably as the last stand of the Vale of Arryn when the white walkers invade. It's going to be epic. Plus, I predict that a dragon saves Sansa or someone of importance from the Moon Door. Why? Because dragons can fly and Sansa is terrified of the Moon Door. If this ends up coming true, I predict the Eyrie going up in towering flames that cause the mountain fortress to blaze in dragonfire that lights up like a miniature sun.  RULE: You don't include a frickin' fortress on a mountaintop in a fantasy series and say it is impregnable if you don't, in fact, intend to impregnate it!

3) Daenerys will turn into a dragon. We've already seen her survive intense fire and have dragons suckle from her teats (in the book). She's called the mother of dragons in the book and she declares, "I am the dragon!" over and over. She says she'll never have kids in her womb...well that's cause she's gonna become a fire-breathing reptile. To be honest...I'm not so certain of this prediction. However, it would be cool. 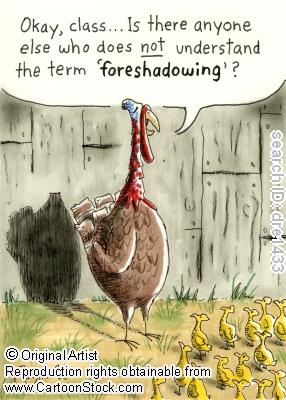 4) Bran will walk again. No one goes to the kinds of trouble Mr. Martin has gone to in having this kid be a cripple for so long without him not being cured of it in some miracle near the end. The kid wants to be a knight...he shall be one with one of his father's swords in his hand (reforged from ICE).

I think that foreshadowing for the most part is too ambitious for most beginning writers and is something that only experienced ones can truly use. There are many reasons for this: 1) You don't know if your book is ever going to be published so you can't employ a technique (unless extremely weak that can be developed later) that will come to fruition in later books. 2) You're limited in your word count. There's only so much you can do in 80,000 words once you've worked in your love triangle, described the characters, and then given them something to do while you have the love triangle play its way out. Sorry, but that's why romance tends to suck...there's no room for any other fantastic writing tools in so little a space. And romance is almost required for a book to be published these days because it means $$$. 3) Foreshadowing requires plotting and most writers these days seem content to do this "pantsing" thing which seems like lazy writing to me (I've no idea why people do it other than they are so excited over a character that the just want to get writing--no idea why this happens either). Don't get me wrong...pantsing will get you agents and book contracts and $$$ but I seriously doubt if it will ever win you critical acclaim for your book. All that matters though is making money...who cares if high-brow people think you suck as a writer, right?
Posted by Michael Offutt, Phantom Reader at 7:45 AM