Abusing Your Reader - A Feast For Crows 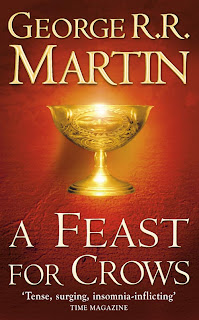 I'm working my way through A Feast for Crows. This is the fourth and last book in the Song of Ice and Fire series until A Dance of Dragons is released next month.

This novel came out five years ago in 2006. Since then, there has been no follow up whatsoever by the author on any of the characters in this series. I liken this to the "Who Shot J.R." episode that occurred in the 1970's in the television show "Dallas" only far FAR worse. Additionally, this novel has none of the prominent characters that we've gotten to know up to this point.

There are no Daenerys chapters (she's the one with the dragons), there are no Tyrion chapters, no Bran chapters, no Jon chapters (the white walker storyline)... instead what we get is a prologue about dragons...and then no dragons in the rest of the 1500-page book...and a cliffhanger where Arya wakes up blind and no follow-up for five years.

Martin does give us a new enemy in this book as the other ones are basically destroyed. Plus he shoves us into Circe's head with her own chapters which are interesting. However, all of these new POV characters suddenly getting their own chapters seems like a big sellout. This smacks of a conversation between author and publisher that goes something like this: "Hey George, we are making millions off of these and you need to make the series longer.  Milk this for us baby." Response from Mr. Martin: "I think I can do that but in order to get more books out of this, I need a new enemy. But I know where to work on this...I'll spend a book building up the Greyjoys that no one gives a shit about and they will be a force to be reckoned with for at least three more novels."

How does a writer get away with this behavior? How can you write a prologue that has nothing to do with the rest of the book? How do you suddenly depart from all the characters that you've been writing about to essentially produce a novel that "takes place in the same world" but essentially has nothing to do with the 6000 pages that came before it? And then to top it off...how on earth do you not provide a follow-up for half a decade?

I'm intrigued by all of this. It's fascinating to me to see just how much the reader is willing to endure when the author decides to take a big steamy shit. Incoming New York Times bestseller...12 weeks at number one (or longer), anyone?

Oh we are all sheeple when it comes down to it, aren't we? And being that we are just sheeple...does it make any sense at all what agents blog about on how to get published? It all seems like such baloney.
Posted by Michael Offutt, Phantom Reader at 7:33 AM

Email ThisBlogThis!Share to TwitterShare to FacebookShare to Pinterest
Labels: A Feast For Crows, Abusing Your Reader, Bad Writing, George R.R. Martin, Misogyny in A Song of Ice and Fire, Writing