What is Mad God about? 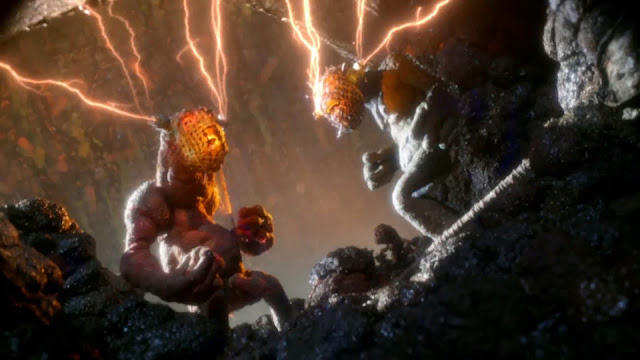 The title of my blog post today says it all lol. I actually don't really know, other than I learned about this project in the last few days. But for sake of coming across as completely ignorant and thereby making it a waste of time for you to read my blog, I'm going to tell you what I do know about it which may be a little more than most. First, it's a passion project by a guy named Phil Tippett who is the founder of Tippett Studios. They specialize in stop motion animation. Tippett has previously won an Oscar and an Emmy for special effects. He's worked on RoboCop, Starship Troopers, Jurassic Park, and the original Star Wars trilogy. It also has taken Tippett thirty years to make this movie. Yes...I said 30 G*Damn years. I can only ask myself...why would anyone spend 30 years of their life working on a thing off and on? But it doesn't matter, because it is finished. Now it just needs to find its audience.

Here's the full synopsis: "Mad God is an experimental animated film set in a world of monsters, mad scientists, and war pigs. A corroded diving bell descends amidst a ruined city, settling down upon an ominous fortress guarded by zombie-like sentries. The Assassin emerges to explore a labyrinth of bizarre, desolate landscapes inhabited by freakish denizens."

And here's the catch...you have to subscribe to Shudder in order to see it. Look...I get launching it on a streaming service. That is what everyone is doing these days. But I'm never going to subscribe to Shudder. I don't like scary movies, though this one (which seems to be pegged in the fantasy/horror genre) is right up my alley. It's not real enough to scare me, therefore, I think I'd enjoy watching it. At least...that's what I'm convincing myself at this time (it's the reason I avoid scary movies). When I watch scary movies, I don't have much fun. I'm hoping that it comes out on blu-ray or some other old format later this year, and I can watch it. In the meantime, I have only testimonials from super famous people I like weighing in on this thing.

"Phil brings humanity and empathy to every character." -- Kathleen Kennedy

I guess I should probably see this thing. Who am I to question Guillermo del Toro or Kathleen Kennedy? I'm not kidding here, these are two of my favorite people in the entertainment industry. Anyone subscribed to Shudder out there that might share their password with me so I can watch this thing? LOL, just kidding. Do yourself a favor and click on the trailer below. It's a real trip.

It seems weird for it to only be mid-May and to make an Oscar prediction, but here goes. I think we shall see Phil Tippett win his second Oscar next year for this thing. Why? One doesn't work for thirty years on something and not win anything for that kind of meticulous attention to detail. That would be barbaric, and the art industry is anything but.

Posted by Michael Offutt, Phantom Reader at 6:53 AM

Email ThisBlogThis!Share to TwitterShare to FacebookShare to Pinterest
Labels: Phil Tippett, What is Mad God about